The first three volumes of the Wild Cards series were published in Russia back in 2005-2006. . . but that was as far as the series went, no doubt to the frustration of our Russian readers.

But after a long hiatus, the aces and jokers are returning once more to Russia, I am delighted to report. The first three volumes have already been reissued, with nifty new eye-catching covers featuring the artwork of D. Borozdina. And our Russian publisher is about to release volume four, ACES ABROAD. 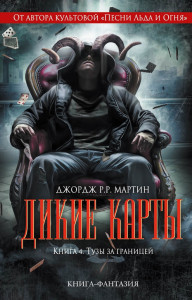 That's another Borozdina cover, this one featuring Fortunato. Who has never looked more kickass.

Even if you don't speak Russian, this one's worth getting for the cover alone.

Russian editions of volumes five, six, and seven are scheduled to follow. After that, well, it all depends on sales... but then, what doesn't?
Collapse