What's that, you ask? Dany and the Dragons? A forgotten rock group of the doo-wop era?

NO! It's a special variant cover for issue #15 of the GAME OF THRONES comic, available only (or so we are told) at the San Diego Comicon, as a comicon exclusive.

This special alternate cover was requested and commissioned by our friends at Mile High Comics, in cooperation with Dynamite Comics. It is my understanding that it will be available only at the Mile High booth. (Though of course the same issue, with the regular cover, will be available from numerous dealers at the con).

The artist is Fritz Casa. 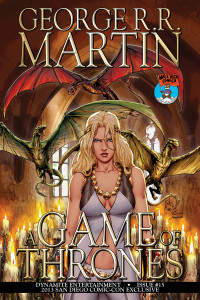 ((Before you all start posting messages and sending emails... yes, we're well aware that the scene depicted does not actually occur in this issue. In fact, Dany's dragons have not even hatched yet in the comics, that's a good ten issues in the future. And even when they do hatch, the dragons won't be that big until, oh, STORM OF SWORDS or so. [A couple of other things here are also bigger than I'd envisioned]. No need to point all this out. My editors and I pointed it all out already to Dynamite and Mile High, but this is the cover they wanted. Artistic License, and all. The Mike S. Miller cover, with a completely different scene, will also continue to be available.))

I am told that Dynamite printed 1500 copies of these for Mile High... but with 150,000 fans at comicon, there's no telling how long they will last. So if you want to snag one, I'd advise you to hit the Mile High booth early.

Yes, I know, that title is a bit of an oxymoron.

There is no real Iron Throne. It doesn't exist. I made it up. I said it was made of melted swords, but really, it was made of words, like all such fictional constructs.

Ah, but it's real to me. That's part of what it means to be a writer. If you don't know what I'm getting at there, go read my old short story, "Portraits of His Children." When I write about the Iron Throne, I SEE it in my head... and I try to describe it as best I can. Not being a blacksmith or an ironmonger, however, I hammer it together with words, striving to make all of you, my readers, see what I see.

Most of the time that works... though, as the recent brouhaha about the Red Viper shows, the picture in the reader's head and the picture in the writer's head do not always line up perfectly. With the Iron Throne, however, the process has been particularly frustrating. A dozen different artists have done versions of the Iron Throne over the years. Some have been very striking, some less so, but none of them have ever been quite RIGHT. Their versions never quite matched what I saw in my mind's eye.

Then came the show, and HBO's version of the Iron Throne.

I'm a realist about these things, and I know perfectly well that for millions of television viewers worldwide, the HBO Iron Throne is THE Iron Throne, and always will be. It turns up everywhere, on book covers, on magazines, in places that have no connection to the show. Say "GAME OF THRONES," and people think of the HBO Iron Throne.

And, hell, in some ways the HBO throne is more real than mine could ever be. They've actually MADE theirs (though it is not actually made of iron). There's the one that sits on the set in Belfast's Paint Hall, and at least six others that travel about the country making promotional appearances at conventions, screenings, exhibits, and the like. They turn up in train stations and parks. Thousands of people have had their pictures taken sitting on the Iron Throne, including many celebrities. And me as well, many times. Over in the UK, Sky Atlantic has their own Iron Throne, that also travels about to help promote the show. Canal + has one too, in Spain. The Spanish and British thrones are variants, somewhat different from the HBO throne, yet similar in most important respects. I've been seated on both of those at well.

The HBO throne has become iconic. And well it might. It's a terrific design, and it has served the show very well. There are replicas and paperweights of it in three different sizes. Everyone knows it. I love it. I have all those replicas right here, sitting on my shelves.

And yet, and yet... it's still not right. It's not the Iron Throne I see when I'm working on THE WINDS OF WINTER. It's not the Iron Throne I want my readers to see. The way the throne is described in the books... HUGE, hulking, black and twisted, with the steep iron stairs in front, the high seat from which the king looks DOWN on everyone in the court... my throne is a hunched beast looming over the throne room, ugly and assymetric...

The HBO throne is none of those things. It's big, yes, but not nearly as big as the one described in the novels. And for good reason. We have a huge throne room set in Belfast, but not nearly huge enough to hold the Iron Throne as I painted it. For that we'd need something much bigger, more like the interior of St. Paul's Cathedral or Westminster Abbey, and no set has that much room. The Book Version of the Iron Throne would not even fit through the doors of the Paint Hall.

So what does the Real Iron Throne look like, you ask? Glad you asked. It looks kind of like this:

That's the Iron Throne as painted by the amazing Marc Simonetti (and if you haven't gotten his 2013 Ice & Fire calendar, better hurry, the year's half over) for the upcoming concordance, THE WORLD OF ICE & FIRE. It's a rough, not a final version, so what you see in the book will be more polished. But Marc has come closer here to capturing the Iron Throne as I picture it than any other artist to tackle it. From now on, THIS will be the reference I give to every other artist tackling a throne room scene. This Iron Throne is massive. Ugly. Assymetric. It's a throne made by blacksmiths hammering together half-melted, broken, twisted swords, wrenched from the hands of dead men or yielded up by defeated foes... a symbol of conquest... it has the steps I describe, and the height. From on top, the king dominates the throne room. And there are thousands of swords in it, not just a few.

This Iron Throne is scary. And not at all a comfortable seat, just as Aegon intended.

Look on his works, ye mighty, and despair.
Collapse