A couple of last minute additions to my schedule for San Diego Comicon.

Avatar Press will be bringing out the first issue of their SKIN TRADE comic at the con, based on my werewolf novella "The Skin Trade," which won the World Fantasy Award back, oh... before some of you were born.

Daniel Abraham did the adaptation and wrote the script. Mike Wolfer did the art (and what a perfect name for this particular story). An asthmatic lycanthrope, a sexy female PI, a gloomy gothic rustbelt city... 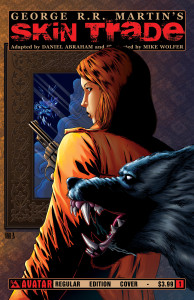 Daniel, Mike, and I will be signing copies of SKING TRADE #1 at the Avatar booth (2701) on Saturday afternoon, 12:30 to 1:30.  This will be a TICKETED signing, limited to 125 people.  Fans can stop by the Avatar booth any time to ask about tickets.  So get there EARLY.

Then, on Sunday, Mike Wolfer, William Christensen, and I will be doing a SKIN TRADE panel in the convention center.  That's 12:00 noon, in room 25ABC.  (Daniel won't be able to join us, he'll be off elsewhere being half of James S.A. Corey).

For those of you who can't be at San Diego, SKIN TRADE #1 will go on sale at your local comic shop tomorrow... well, I see it's past midnight, so make that today.  Wednesday, July 17. 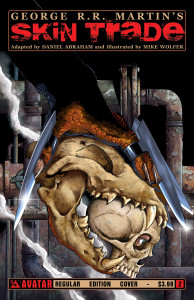 But speaking of San Diego, I had better go pack.  See you all at Comicon!
Collapse