Monday's big GAME OF THRONES extravaganza with Maisie Williams and the wolves is not the only special event we'll be having this week at the Jean Cocteau Cinema in Santa Fe.

So come on Monday by all means... but then mark your calendars and come back again a week from today, on Saturday January 25, when Peter S. Beagle will be visiting Santa Fe for a special one-day show featuring his animanted fantasy masterpiece, THE LAST UNICORN.

Peter S. Beagle, for those unfamiliar with his work, is one of the great living masters of fantasy, winner of the Hugo Award, the Nebula Award, the Locus Award, the World Fantasy Award, and the  Grand Prix de l'Imaginaire.    He's been writing the stuff a lot longer than johnny-come-latelys like me.  In 1960 (eleven years before I made my first professional sale), he published A FINE AND PRIVATE PLACE, a delightful story about a man who lives in a graveyard, which remains a personal favorite of mine.   Other titles by Beagle include I SEE BY MY OUTFIT, THE INNKEEPER'S SONG, LILA THE WEREWOLF, TAMSIN, GIANT BONES, and many many more, all of them terrific... but his best known work, to this day, remains THE LAST UNICORN, a classic fantasy about Schmendrick the Magician, the Red Bull, Madama Fortuna, Molly Grue... and, of course, the last unicorn. 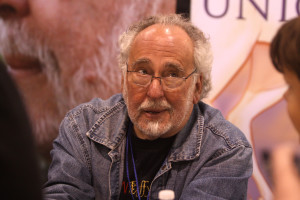 First published in 1968, the novel became an instant classic, and remains so to this day.   In 1982 it was made into an animated film, with a screenplay by Peter himself, and the voices of Mia Farrow, Alan Arkin, Jeff Bridges, and Christopher Lee featured.  The movie was popular as well, but subsequent legal disputes made it unavailable for long periods of time.   But now it's back, and Peter has it and will be bringing it to Santa Fe and the Jean Cocteau for ONE DAY ONLY next Saturday.

We've scheduled three screenings: a matinee at noon, an evening show at 6:30 pm, and a late show at 9:00 pm.  Peter Beagle himself will be on hand for all three screenings to introduce the films and answer questions, and afterward he will be signing book, videotapes, and other merchandise, plenty of which will be on hand in the Cocteau concession area.  Tickets for these special screenings will be $12 (the usual discounts apply).

In addition, at 5:00 pm, I will be joining Peter on stage, for a dialogue about fantasy, writing, live, love, what have you.  A combined ticket -- any show of THE LAST UNICORN plus the PSB/ GRRM dialogue -- will go for $20.

You can purchase advance tickets at the Cocteau website at http://webtixs.easytixs.com/JeanCocteauCinema/TicketingStartPage.aspx?635256716192656250  .  Or you can take your chances at the door. (But I would not advise the latter.  These author events have all been selling out).

((YES, our website's advanced ticketing system sucks bigtime.  I know, I know, I know, no one has been bitching louder than me.  It is ugly, hard to navigate, user unfriendly, and you have to go through eight bloody pages before you actually obtain a ticket.  We're working on it.  "Working" here meaning "scrapping the damn thing and starting over."  But these things take a while, so all I can say for now is, please persist.  You will get a ticket in the end if you don't give up.  And if you want a screening AND the dialogue, the 'Combined Ticket' function has been a major pain, so just buy separate tix for each event, and we will refund you the difference at the door.  And again, my apologies)).

Oh, and if Peter S. Beagle and THE LAST UNICORN are not enough for us, we also plan to mount a special Last Unicorn Art Show in the Cocteau gallery.  Prints and artwork will be for sale.  Along with pizza, candy, and the best popcorn in New Mexico.

(And the real movie fans can stay for the midnight show, and catch THE BRAIN THAT WOULDN'T DIE).  Which has no unicorns whatsover, but did you expect?  Peter Beagle got the last one.