We like to boast that the Jean Cocteau Cinema is Santa Fe's most eclectic movie theatre.  That truth has never been more in evidence than it will be this upcoming weekend, when we are opening five (count 'em, 5) very different films.

THE HUNT is a serious drama, starring Mads Mikkelsen, and one of the finalists for this year's Best Foreign Film category in the Oscars.

WELCOME TO THE JUNGLE is a raucous, raunchy comedy, featuring Jean-Claude Van Damme in his first comedic role.

ROMEO & JULIET, our Valentine's Day special, is of course the Bard's most romantic play.  It's been put on film countless times, as the Shakespeare fans out there know.  The one we're showing is the best, in my not so humble opinion: the gorgeous 1968 version directed by Franco Zeffirelli, starring Leonard Whiting and Olivia Hussey.  Back in 1968, Zeffirelli's ROMEO & JULIET was both widely acclaimed and highly controversial, since he took the radical and unheard-of steps of casting actual teenagers as the teenaged Romeo & Juliet, instead of actors in their forties.  Makes it a whole new play, I think.

And fifth, but not least, come Saturday noon we're showing THE IRON GIANT, a personal favorite, as our children's matinee.  All kids under 12 admitted free.

Something for all tastes, I think.

See you at the movies.

THE SWORN SWORD is back.

The graphic novel, that is.  Scripted by Ben Avery, illustrated by Mike S. Miller, it has been out of print for years in its original editions from Marvel and DBPro, and fetching ever higher prices on ebay, but now at last there is a brand new edition for those who want to read Dunk & Egg's second adventure without paying collector's prices for it.  Jet City Comics released their own edition of THE HEDGE KNIGHT II: THE SWORN SWORD on January 22, in both digital and print formats.   You'll find the paper editions on sale at your favorite local bookstore or comics shop.  The electronic version is available for Kindle from Amazon at 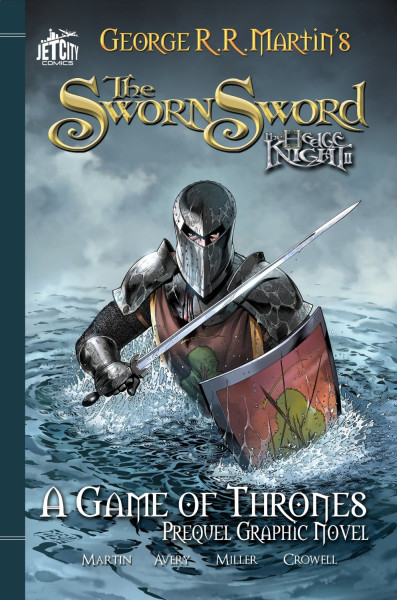 So far, the response has been great.  Both the physical and digital editions debuted on Amazon as #1 in Comics & Graphic Novels: Fantasy, ahead of many great works.  And the physical edition rose to the Top 600 in Books.

The graphic novel of THE HEDGE KNIGHT also saw a boost, rising to #2 in Comics & Graphic Novels: Fantasy.

And Jet City published a new interview with Mike S. Miller about his experience working on both projects.

Meanwhile, over at Random House, Ben Avery and Mike S. Miller are reportedly hard at work on a graphic novel adaptation of the third Dunk & Egg novella, "The Mystery Knight."  More on that one down the line.