The bar at the Jean Cocteau has been serving beer and wine and a few mixed drinks for most of the past month, but all the while construction was still going on during the days, as the last few finishing touches were done.  But now the work is finished, and next week on Tuesday, Wednesday, and Thursday we are having our official

We'll be having free movies all three days, from opening to close.  The Tuesday matinee will be CHARADE, with Cary Grant and Audrey Hepburn.  On Wednesday, it's ONE-EYED JACKS with Marlon Brando.  On Thursday, Abbott & Costello in JACK AND THE BEANSTALK.  We're running late shows all three days as well, starting at 11:00 pm:  SPIDER BABY on Tuesday, PLAN 9 FROM OUTER SPACE on Wednesday, and THE BRAIN THAT WOULDN'T DIE on Thursday.  And in between, all three days, we'll be screening BACK TO THE FUTURE at 6:10 and 8:30. 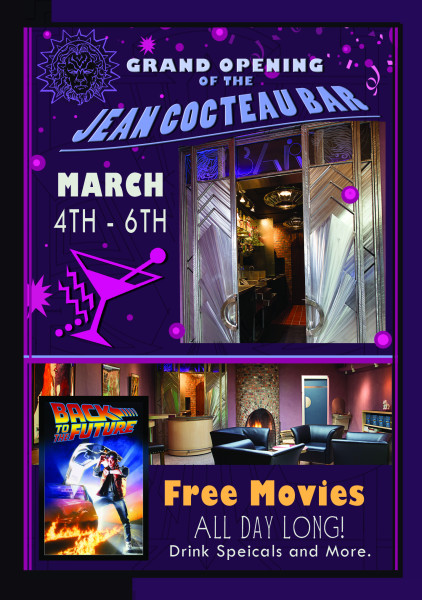 Oh, we'll be showing assorted cartoons and short subjects as well.  (And of course, lots of trailers).  And we will be offering a special drink, the Flux Capacitor, along with four kinds of draft beer, wine, beer, the best popcorn in New Mexico, pizza, candy, all the usual.

And that's not even the coolest part.  The coolest part is that we will have Doc Brown's TIME MACHINE with us as well!  Yes, complete with the real flux capacitor, though as I recall this one doesn't have a Mr. Fusion yet.  It will be tooling around Santa Fe starting on Tuesday morning, and during show times you will find it right in front of the theatre (assuming our parking permit comes through).  Oh, and we'll have our own Doc Brown to explain its workings to you.

And on Wednesday (ONE DAY ONLY) we will have the DeLorean's owner, Ernie Cline, on hand as well... showing off the car, and signing copies of his novel READY PLAYER ONE.

The DeLorean will be hard to top, admittedly... but we hope our new bar will be a star attraction as well.  Even if you don't have time for a movie, drop by and see it, we hope you'll think it is as cool as we do.  Remember, no charge for admission.  For those three days only, all movies are FREE.