An Announcement brought to you by the Minions of Fevre River:

Today, Disruptor Beam just launched a new version of the game for iPad.

If you haven’t tried the game since it first came out, it’s worth checking out again now.  Many features have been added, like forming alliances with other players for large-scale battles—not to mention a huge amount of content, items and artwork.  If you’re brand new, then you’re in for a treat: the iPad version is a big improvement over the Web version, with crisp graphics and an overhauled touchscreen interface.  As Season 4 airs, the game will also feature weekly updates based on the events you watch on HBO.

Disruptor Beam tells me that an Android tablet version will also be available in several weeks.  For those of you with an iPad, you can download it today by following this link: https://itunes.apple.com/us/app/game-of-thrones-ascent/id799145075?ls=1&mt=8

You can also get more information about all the versions of the game on Disruptor Beam’s website: http://disruptorbeam.com 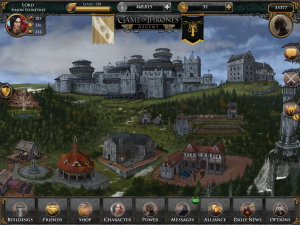 An Announcement brought to you by the Minions of Fevre River-

The upload of the new sample chapter from THE WINDS OF WINTER created so much traffic to my website and blog that the servers crashed.  This is the first time I've been able to get up myself all day.

Anyway, it seems to be easing off some.  And we are looking at ways to increase capacity.

The "reviews" of the chapter have been amazingly enthusiastic as well.  Thanks.   I am pleased that so many of you -- thousands and maybe tens of thousands, it would seem -- enjoyed "Mercy" so much.

I mentioned that this chapter had quite a history.  It's true.  The first draft was written more than a decade ago.  Originally, it was intended to be the opening Arya chapter after the infamous "five year gap," her first appearance in A DANCE WITH DRAGONS as initially conceived.   Then it was supposed to be a part of A FEAST FOR CROWS, after I abandoned the five year gap and split the books.  Then it was going to be the concluding Arya chapter in A DANCE WITH DRAGONS.  But it seemed more like an opening chapter than a closing one, so shortly before ADWD was published my editor and I agreed to remove it from DANCE and shift it over into WINDS.  Of course, it has been revised, tightened, polished, and tweaked at every step of the way, so the version on my website has some significant differences from the "five year gap" version.

Some of you who enjoyed meeting Mercy may not have found the other sample we've put out there of late, a new Tyrion chapter.  That one is live and available with the ICE & FIRE app, and can be found at