ENTERTAINMENT WEEKLY is doing a big double-issue about GAME OF THRONES. Four gorgeous variant covers (collect them all, kids!), and pages and pages of material... including a sidebar feature about how long the series will run.

This discussion is nothing new, of course. I get asked similar questions every time I make a public appearance, do an interview, or walk a red carpet. My usual answer is a variant on, "I don't know how many seasons the show will run."

I don't know. No one knows.

This is Hollywood, friends. As William Goldman wrote in ADVENTURES IN THE SCREEN TRADE, in Hollywood "nobody knows anything."

I do know that David & Dan have stated in interviews that they see the show winding up in seven seasons. People send me emails about that every time I say "I don't know" in response to the question, as if I were somehow unaware of what D&D have said. I'm not.

I also know that HBO wants the series to run longer than that. I have known that since the very beginning... well, actually, since the day after the second episode of season one aired, when I had lunch with one of HBO's top execs, who told me, "We want this to run ten years." I allowed that ten years sounded fine to me. I continue to hear similar sentiments from HBO every time I have meeting with them, be it in LA or New York.

And it should be pointed out that neither ten seasons or even seven is locked in. Right now, GAME OF THRONES is guaranteed only six seasons. That's all HBO has officially committed to, by contract. We can speculate about additional seasons beyond that, but that's all it is, speculation. A lot of things can happen between now and season seven, or eight, or nine, things that cannot be anticipated. Believe me, I've been there. I was on staff on an hour-long TV series that was pulled off the air and retooled as a half-hour show. I was on staff on another show that could easily have run five, six seasons... until our lead actress left, and took most of our audience with her. I had a pilot that was so hot that the network ordered six back-up scripts and all but guaranteed us a midseason slot... but without an actual production order, that meant nothing when the network underwent some big personnel changes, and new people came in.

I am not saying that any of these things will happen with GAME OF THRONES. But they could. Weird stuff happens in television, and there are sooooo many factors involved. Budgets. Actors' contracts. New shows in development. Ratings (though HBO does not weigh ratings as heavily as the broadcast networks, that does not mean they are unaware of them). Awards.

HBO usually renews their shows for one season at a time. It was very unusual, last year, when they stepped up soon after the season four debut to order both season five and season six. Bloggers and journalists can speculate as they please, but none of it will mean anything until next year, when season six begins to air. Around the time that the second episode of season six is showing, HBO will order season seven, we hope... or maybe, just maybe, they will order seasons seven AND eight. But even if they just order season seven, that doesn't mean that the show will end in seven; it could just represent a return to the original policy of committing to only one season at a time.

All of which is a long-winded way of saying what I said to begin with: no one knows.

I see that this new crop of stories also raises, once again, the notion of concluding the series with one or more feature films. And in some of these stories, once again, this idea is wrongly attributed to me. Let me state, yet again, that while I love this idea, it did NOT originate with me. It was a notion suggested to me, which I have enthusiastically endorsed... but since I was the first person to raise the possibility in public, somehow I am being seen as its father.

Sure, I love the idea. Why not? What fantasist would not love the idea of going out with an epic hundred million feature film? And the recent success of the IMAX experience shows that the audience is there for such a movie. If we build it, they will come. But will we build it? I have no bloody idea.

As we go forward, I expect I will have a voice in all these decisions. But mine will only be one voice among many, and there are all sorts of other factors that can come into play. I will say, I am incredibly fortunate in having partners like HBO, and David Benioff and Dan Weiss. Seven seasons, ten seasons, with or without one or two feature films... in the end, all that matters is that we tell a great story, with a great end.

Terry Pratchett is gone, and the world of fantasy is that much poorer this morning.

The creator of Discworld, and author of more novels than I can dare to contemplate, Terry was one of our greatest fantasists, and beyond a doubt the funniest. He was as witty as he was prolific, and that's saying something. The BBC has an obituary for him here:

I cannot claim to have known Terry well, but I ran into him at dozens of conventions over the decades, shared a stage with him a few times, and once or twice had the privilege of sharing a pint or a curry. He was always a delight. A bright, funny, insightful, warm, and kindly man, a man of infinite patience, a man who truly knew how to enjoy life... and books. 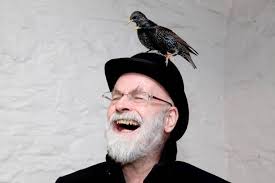 He is survived by Granny Weatherwax, Nanny Ogg, Mort, Death, Death of Rats, Commander Vimes, the Librarian, Cohen the Barbarian, Rincewind the Wizard, the Luggage, and hundreds of other unforgettable characters, whose adventures will continue to delight and surprise readers all over the world for many years to come.

Terry Pratchett was one of the good guys. He'll be missed.
Collapse