... I saw ANT-MAN last night at the Violet Crown down the street from the Cocteau, and loved it.

(It's not playing at the JCC, though I wish it was. Alas, we have only the one screen).

Now, I have to confess, as an old -- VERY old -- Marvel fanboy (I was once a member of the Merry Marvel Marching Society), I was a little disappointed going in when I heard that this would be the Scott Lang Ant-Man and not the original Hank Pym Ant-Man of my youth. Scott Lang came in just about the time when my regular comics reading was falling off, so I did not know the character very well, whereas I knew and loved Hank and Janet, Ant-Man and his winsome Wasp. I was there at the dawn of time when they first started adventuring through the pages of TALES TO ASTONISH, after all. They were never as popular as the other heroes that Stan Lee created back then -- Iron Man, Spider-Man, Thor, and such -- but Lee always seemed to have a soft spot for Ant-Man, and I did too. Ant-Man was the ultimate underdog, after all, the little guy in a very literal sense who somehow held his own with gods and monsters whose powers dwarfed his own. The ants were cool too, and gave him a definite edge in my mind over his rival itty-bitty hero over at DC, the Atom.

And I loved his partnership with the Wasp. At a time when every other comic was playing the endless "romantic tension" card, or the older and hoarier "I must hide my secret from my girlfriend" trope, here was a man and a woman who adventured together, who loved each other without question, who even helped found the Avengers together... that was revolutionary in the early 1960s, like much of what Stan Lee did... (and sad to say, it would even be sort of revolutionary today). 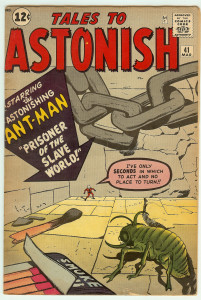 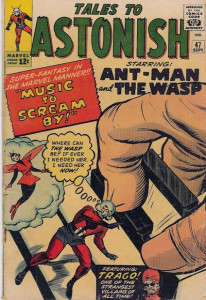 The original Ant-Man had a short run compared to the other first generation Marvel heroes like Thor and Iron Man. In an effort to make the character more popular, Lee and his successors began to fiddle with the concept, giving Hank Pym the power to grow as well as shrink. Ant-Man became Giant-Man became Goliath (same powers, different costumes) became Yellowjacket became "Hank Pym, Scientific Adventurer" (I did you not). Truth be told, I never liked any of those revamps half as well as I liked the original Ant-Man, and when the writers (not Lee, new people had come on board by then) decided to make Hank mentally unstable and then turned him into a wife-beater... well, I really hated that. (I did, however, like some of what happened subsequently, when the Wasp came into her own and became the leader of the Avengers). After that was the Scott Lang era, I guess... and then a couple more Ant-Men after him... none of which I followed, or gave a damn about.

Given all this history, I had a lot of trepidation when this movie was announced. Would they do it right, would they capture the original Ant-Man from TALES TO ASTONISH and AVENGERS #1, the character I'd loved... or would they fuck it up?? I was eager for the film, but apprehensive about it as well, especially when I heard it would be about Scott Lang, not Hank Pym.

I am relieved and delighted to report that they did it right.

Scott Lang is the featured Ant-Man, yes, and Paul Rudd makes him a sympathetic and engaging protagonist, but due honor is done to Hank and his own career as the first Ant-Man as well, with Michael Douglas turning in a fine performance as Pym. There's a lot of humor in this film, but it is not a farce, as I feared it might be. There's a lot of action too, but not so much that it overwhelms the plot and characters, which was my problem with the last AVENGERS film... and the one before it, to think of it. A superhero movie needs a fair share of smashing and bashing and stuff blowing up, of course, but IMNSHO that stuff works best when it is happening to people we actually know and care about, and if you jam in too many characters and don't take time to develop any of them properly, well...

Oh, and I loved the ants!

Quibbles? Yeah, a few. Where was the Wasp? We got a few glimpses, and a set up for the next film. But I wanted more Wasp, and I loved the old original Hank/ Janet dynamic (before they got to the wife-beating stuff). Also, while Yellowjacket makes a decent villain here (in the comics, of course, he was actually one of Hank's later identities, after Giant-Man and Goliath), I am tired of this Marvel movie trope where the bad guy has the same powers as the hero. The Hulk fought the Abomination, who is just a bad Hulk. Spider-Man fights Venom, who is just a bad Spider-Man. Iron Man fights Ironmonger, a bad Iron Man. Yawn. I want more films where the hero and the villain have wildly different powers. That makes the action much more interesting).

But those are quibbles, as I said.

Overall, I had a swell time. For a few hours I was thirteen years old again.

And did I mention that I loved the ants?
Collapse