I used to have a couple pages on my website called "What I'm Watching" and "What I'm Reading." They're still there, actually, but they're years out of date. I just don't have the time to keep them up any longer, with all the other things on my plate.

But that doesn't mean I have stopped watching movies or television, or that I don't read. I still read voraciously, watch lots of television, and go to a movie a week, on the average. So I thought I'd say a few very brief words about stuff I've enjoyed recently.

Most of the films I see are the ones I'm playing at my own theatre, the Jean Cocteau... but not all. A few days ago, Parris and I caught the new JUNGLE BOOK at the Violet Crown down the street from the JCC, and I loved loved loved it. A magnificent production. Supposedly it's a remake of the old Disney cartoon version, but it's about ten thousand times better for hardcore Kipling fans like yours truly (Kiplers?) Not completely faithful to the books, which I count as an enduring masterpiece, but it certainly captures much of their flavor, which the cartoon did not. Gorgeous to look at (CGI has come a long way), genuinely exciting... Shere Khan is scary. My only quibble is Baloo. Much as I love Bill Murray, and I do love Bill Murray, I wanted a lot more of Kipling's Baloo. Murray's version is so very Bill Murray he could have wandered into the jungle straight from GHOSTBUSTERS. That's minor, though; the other voice actors did a marvelous job of becoming their animals, and the kid playing Mowgli (who has gotten some mixed reviews) struck me as charming and unaffected, a natural and believable performance. If you like Kipling, see this one. If you like good movies, ditto. (I wonder if talking animals make this fantasy enough to be eligible for a Hugo next year? I'd certainly be willing to nominate it).

Meanwhile, on television... this really IS the Golden Age of television, so much good stuff to watch. It's hard to keep up. Parris and I are going to miss THE GOOD WIFE, but we've been enjoying the hell out of BETTER CALL SAUL and COLONY, and the new season of PENNY DREADFUL has been fun so far as well. The show that's really knocking our (argyle) socks off, however, is the second season of OUTLANDER. Diana Gabaldon should be thrilled; they are really doing her books proud. This year the action moved to France, and the costumes, sets, and cinematography have all been fabulous. As have the performances. Both of the leads are terrific, and Tobias Menzies (who also appears in GAME OF THRONES from time to time) is sensational in his double role. They should nominate the guy for an Emmy twice, once for each character. OUTLANDER is one of the best shows on television, a wonderful blend of historical drama, science fiction, fantasy, and romance.

Books? Well, if you haven't yet grabbed a copy of Joe Hill's THE FIREMAN, you need to. Original and gripping, a page-turner... and I am looking forward to meeting Joe in person when he visits the Jean Cocteau on Monday for a reading and signing (tickets going fast! get yours now). I've also really enjoyed a non-fiction title from a couple of years ago called THE BEAUTIFUL CIGAR GIRL, by Daniel Stashower, which is simultaneously a bio of Edgar Allan Poe and a "true crime" account of a sensational NYC murder case that inspired him to write "The Mystery of Marie Roget." Call this one history or biography if you must, but it reads like a novel... and I especially loved the stuff about the New York City press, one of my obsessions.

Oh, and while the stack of ARCs and bound galleys and new books by my bedside waiting to be read is taller than I am, I'm especially excited by a couple of recent arrivals. HIGH GROUND, the first volume of Melinda Snodgrass's new space opera series, is here, and I can't wait to get into it... especially since one of her villains, BoHo, is actually my creation (he is not really villainous, he's just misunderstood) from the days when Snod and I were making up characters for a new shared world series that never took off. ((Think of BoHo as the Flashman of Space; I loved George McDonald Fraser almost as much as I love Kipling)).

Also on hand is David Anthony Durham's new historical novel, THE RISEN, his take on Spartacus. DAD never disappoints, and Spartacus is another fascination of mine... I look forward to seeing how Durham's take on him differs from Howard Fast's and Colleen McCullough's.

Also just in is Lisa Tuttle's THE SOMNAMUBIST AND THE PYSCHIC THIEF, featuring Miss Lane and Jasper Jesperson, the Victorian-era detectives she first introduced in her stories for DOWN THESE STRANGE STREETS and ROGUES. Those were hugely entertaining stories, and I am eager to see what Lisa does with the characters at novel length. Fans of Sherlock Holmes should love this.

Life is too short. So little time, so many books and movies and television shows.

Oh no, it's another Ogre Jenni post about an upcoming event at the Jean Cocteau in Santa Fe! Sadly, I'm still not George R.R. Martin, and he won't give me enough of his blood or hair to complete the ritual.  :-(

On Monday, May 23rd New York Times best-selling author Joe Hill will join us at Jean Cocteau Cinema to celebrate his latest novel, The Fireman. We will have an awesome drink special designed for the event—garnished with FIRE! Learn a little bit more about the event here. 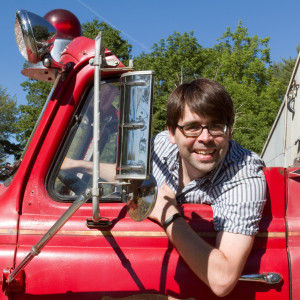 Joe Hill is the author of four novels, Heart-Shaped Box, Horns, NOS4A2, and The Fireman, as well as a prize-winning collection of stories, 20th Century Ghosts. He also wrote a pair of comics: Locke & Key and Wraith (which ties into the world of NOS4A2). Some nice people gave him an Eisner Award for his work in funny books, which is a great honor, even if “funny” probably doesn’t do a good job of describing the kinds of things that happen in the comics. Come to think of it, his comics aren’t very comic either. 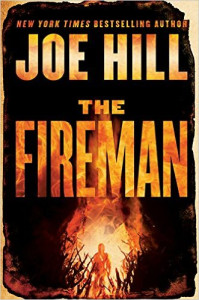 From the award-winning, New York Times bestselling author of NOS4A2 and Heart-Shaped Box comes a chilling novel about a worldwide pandemic of spontaneous combustion that threatens to reduce civilization to ashes and a band of improbable heroes who battle to save it, led by one powerful and enigmatic man known as the Fireman. The fireman is coming. Stay cool.

A terrifying new plague is spreading like wildfire across the country, striking cities one by one: Boston, Detroit, Seattle. The doctors call it Draco Incendia Trychophyton. To everyone else it’s Dragonscale, a highly contagious, deadly spore that marks its hosts with beautiful black and gold marks across their bodies—before causing them to burst into flames. Millions are infected; blazes erupt everywhere. There is no antidote. No one is safe.

Harper Grayson, a compassionate, dedicated nurse as pragmatic as Mary Poppins, treated hundreds of infected patients before her hospital burned to the ground. Now she’s discovered the telltale gold-flecked marks on her skin. When the outbreak first began, she and her husband, Jakob, had made a pact: they would take matters into their own hands if they became infected. To Jakob’s dismay, Harper wants to live—at least until the fetus she is carrying comes to term. At the hospital, she witnessed infected mothers give birth to healthy babies and believes hers will be fine too. . . if she can live long enough to deliver the child.

Convinced that his do-gooding wife has made him sick, Jakob becomes unhinged, and eventually abandons her as their placid New England community collapses in terror. The chaos gives rise to ruthless Cremation Squads—armed, self-appointed posses roaming the streets and woods to exterminate those who they believe carry the spore. But Harper isn’t as alone as she fears: a mysterious and compelling stranger she briefly met at the hospital, a man in a dirty yellow fire fighter’s jacket, carrying a hooked iron bar, straddles the abyss between insanity and death. Known as The Fireman, he strolls the ruins of New Hampshire, a madman afflicted with Dragonscale who has learned to control the fire within himself, using it as a shield to protect the hunted . . . and as a weapon to avenge the wronged.

In the desperate season to come, as the world burns out of control, Harper must learn the Fireman’s secrets before her life—and that of her unborn child—goes up in smoke.