Feeling much better now, though I am still sipping tea with lemsip a couple times a day to keep the chest congestion down. The coughing has largely subsided.

Anyway, as I was intending to say before I got the crud, we had a great time in Baltimore and NYC.

Balticon was celebrating its fiftieth birthday this year. Half a century of cons, pretty extraordinary. To mark the occasion, they brought back as many of their previous GOHs as they could (some were unavailable, and some had died), to join me, the current year Guest of Honor. It's always great to see old friends like Connie Willis and Joe Haldeman, and especially friends like John Varley, who I hadn't run into for a couple of decades. Of course, a lot of new friends were on hand as well. Balticon moved back downtown for this year's con, so we were right at the Harborplace, across the street from the Constellation and the dragonboats, and within sight of the Hyatt Regency where the first Baltimore worldcon was held. Brought back a lot of memories.

I did a lot of signing, a kaffeeklatch, a special fund-raising dinner where I changed tables for every course, an interview, the opening ceremonies (crabs and paddleboats and pirates, ph my), and read the Damphair chapter from THE WINDS OF WINTER.

And we ate crabs, and pronounced them good.

(We also ate "the best pizza in Baltimore" and pronounced it less good).

And then it was time for the Acela, and New York City.

New York City was mostly business, as it usually is: meetings with my agents, publishers, editors, and of course HBO. But we found time to fit in a couple of pizza tastings, both in Brooklyn and Manhattan. Also managed to get into the Carnegie Deli, which I fear is falling on hard times. We always try to catch a show when we're in the city. This time it was HAMILTON.

Guys, gals, go see HAMILTON. Everything you've heard is true. It is going to win a bunch of Tony Awards. The performances are incredible. And after the show, we got to sneak backstage and hang some with King George III, Thomas Jefferson, and Alexander Hamilton his own self. 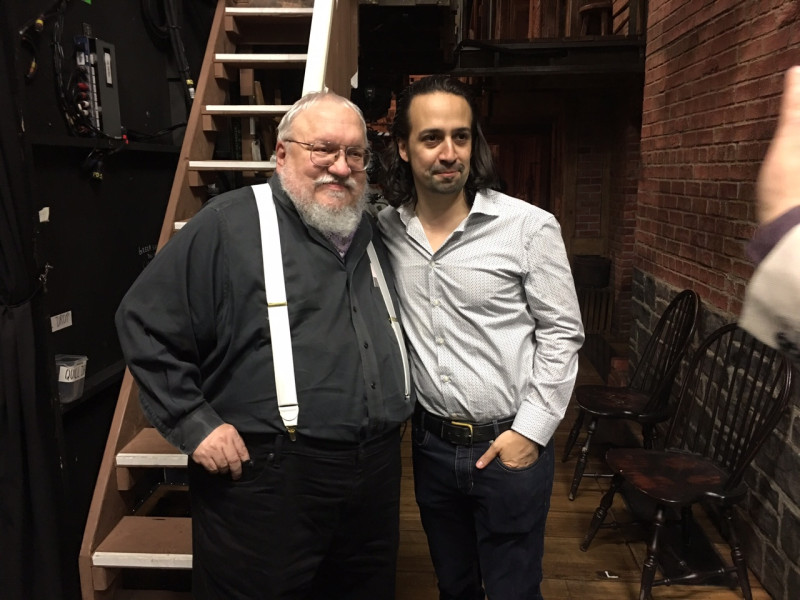 Even that was not the highlight of the New York part of the trip, though. That came a day later, when Parris and I headed over to Bayonne to visit with my sisters and brothers-in-law, my niece and nephews and their partners... and meet, for the first time, my great nephew Brady, born a few weeks earlier. It would appear that I am now a gruncle.
Collapse