The Wild Cards Reread continues over at Tor.com with Katie Rask's insightful look at JOKERS WILD, the third volume in the series and our first full mosaic.

Head on over and join the fun at http://www.tor.com/2017/05/08/when-sex-death-and-kid-dinosaur-collide-wild-cards-iii-jokers-wild/ We'd love to know your thoughts. 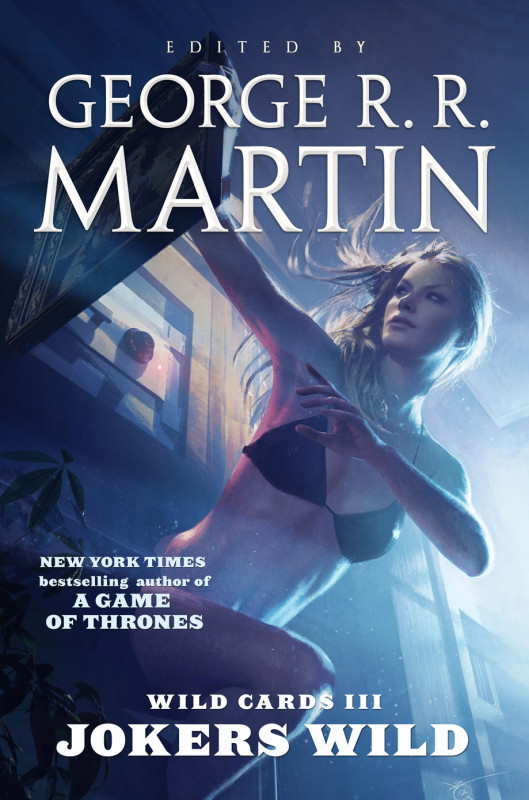 I am, of course, far from objective, but INMNSHO this was one of the strongest volumes in the series, and a groundbreaking one -- the first time (not the last) that we would attempt to innovative (if exhausting) mosaic format, where the stories are woven together to form a seven-way collaborative novel. No shared world had ever done that before, and so far as I know, none has been so insane as to attempt it yet. Except for us. Wild Carders are nothing if not mad.

JOKERS WILD is also the climax of our first triad, and offers a final resolution to a major storyline.

So head on over and join Jetboygirl, Fortunato, Hiram Worchester, Roulette, Sewer Jack, Bagabond, Wraith, Yeoman, Demise, Popinjay, the Astronomer, and the rest of the merry gang.

Got home from nigh on two weeks in California on Thursday night.

It was a great trip, but damn, I'm tired. No rest for the wicked, however. I don't check email when I travel, so it does tend to pile up and up and up and up. So now I am digging as fast as I can, but there's lots going on here as well. M-M-Max Headroom is in town all week.

Had a great time on the Queen Mary with the Horror Writers. If you've never visited the Queen, you should. Even tied up to a wharf, she puts modern cruise ships to shame. All that wood, all that art deco. The public rooms are just gorgeous. And the good folks at HWA let me present one of their Bram Stoker Awards. Which is not, incidentally, a bust of Bram, but rather a Creepy Little House. Not to be confused with the new World Fantasy Award, which is a Creepy Little Tree.

The last time I visited the Queen, the Spruce Goose was still housed in the giant dome next door. The Goose is long gone, alas, but the dome is still there, cavernous and empty. I kept gazing out at it and thinking, "hmmmm, just think what Meow Wolf could do with that."

After Stokercon, it was on to San Diego. Raised a few sheckles for Clarion with my conversation with Kim Stanley Robinson, which I believe should be turning up on line sometime soon. Spoke to a couple of classes at UCSD as well. The real highlight of the visit, however, was my visit to a high school class which is studying... yes... my books. I was greeted by two pretty young ladies in Kingsguard cloaks, and presented with a lovely raven drawing and a sword with a map of Westeros on it. The kids were really sharp, too. They asked better questions than half of the journalists who interview me.

Then it was back to LA and meetings, meetings, meetings. Some exciting stuff is happening. A lot of it I can't tell you about -- yet -- but the trades have already spilled a few of the beans so I suppose I can acknowledge that, yes, HBO is developing a successor show to GAME OF THRONES, and yes, SyFy may be doing a series based on my novella "Nightflyers." More on all that later. There's lots more too, but the beans remain unspilled on that, so mum's the word... for now.

Oh, and I had a few spare hours in Beverly Hills, so I swung by the B&N at the Grove and signed all their stock of my books. So if you're in the neighborhood and looking for an autographed copy, get there while their supply lasts (and if you're too late, you can meet your signed book needs via mailorder from my own Jean Cocteau).