No, not the historic old railroad town of Las Vegas, New Mexico, where Doc Holliday and Hoodoo Brown once prowled the streets, but that gaudy newcomer in the desert, Las Vegas, Nevada.

As part of the weekend festival called Life Is Beautiful, Meow Wolf took over an defunct motel and redid the courtyard and all the rooms in their own surreal and inimitable style.

You can see some of the rooms here:
https://www.reviewjournal.com/entertainment/arts-culture/see-21-interactive-rooms-at-art-motel-for-life-is-beautiful-video/

Alas, alack, I gather that Life Is Beautiful only lasted the weekend (life, it would seem, must go back to being whatever it is the rest of the year), and the Meow Wolf installation was only temporary, so if you missed it, you're out of luck.

(I would have told you earlier, but I did not know myself).

There's still plenty of time to come to Santa Fe and see the original Meow Wolf, however.

And if you can't, well, cross your fingers -- Meow Wolf may soon be coming to a city near you.

Saturday was fun. I drove down to the beautiful Tamaya Resort on the Santa Ana Pueblo, north of Albuquerque, to attend the annual gathering of the HWA... no, not that HWA (the Horror Writers Association, who had their own gathering in May on the Queen Mary), and no, not that other HWA (the Historical Writers Association) either... but the newest HWA, the Historical Writers of America. My faithful minions Lenore Gallegos and Marisa X. Jimenez came with me. 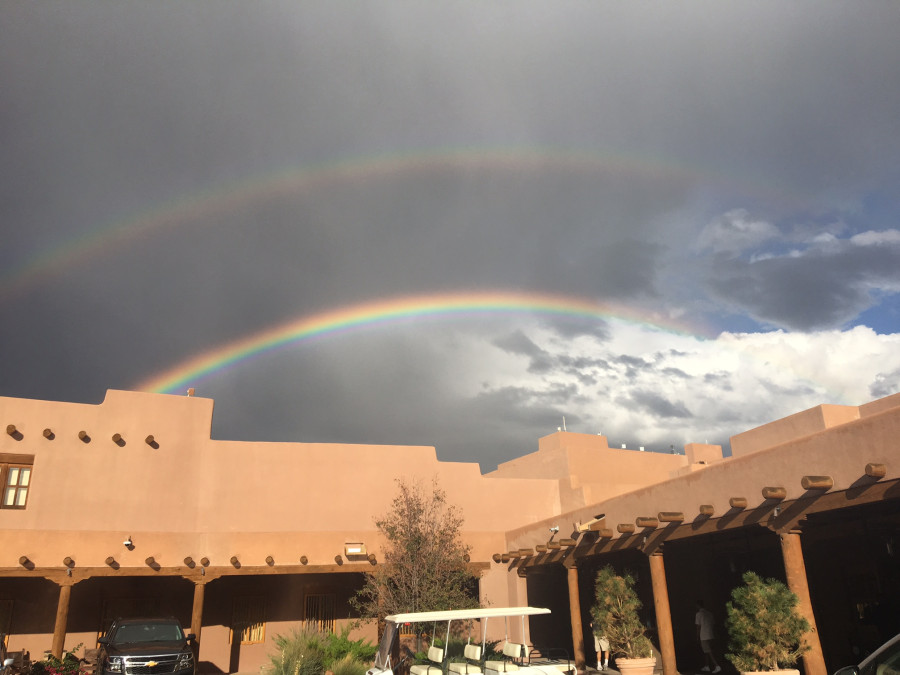 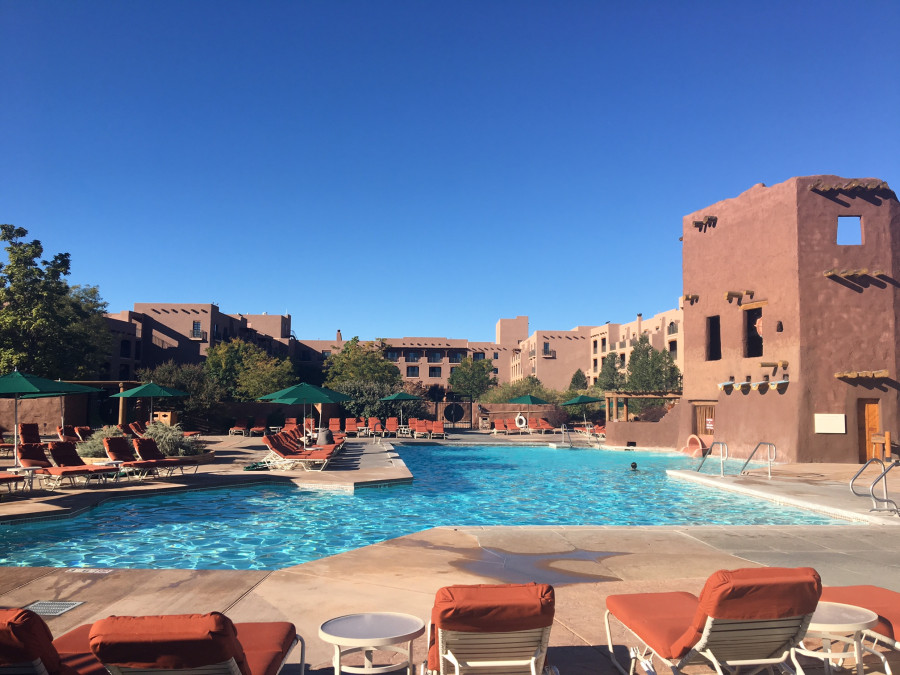 Tamaya is just stunning, and the food was amazing for a hotel banquet. The company was great as well. I love a good historical, and I was pleased to meet some of the people who write them. And my dear friend Melinda Snodgrass was the featured speaker after the feast.

And then they gave me an award: I'm the first (well, one of the first) recipient of the PastWords Award for Historical Fantasy. HWA had a rather handsome bronze trophy made up, with a writer and a reader flanking an hourglass. I'm told the award was designed by Gage Prentiss, the artist who designed the H.P. Lovecraft Statue that's to go up in Providence (for more info about that project, see here: http://www.weirdprovidence.org/statue.html )

The other winners of this year's PastWords Awards were a distinguished lot, whose number included Larry McMurtry and Congressman John Lewis, both of whom I would have loved to meet. Alas, neither one was able to attend.

Here's a shot of Melinda and me at the awards banquet with HWA founder Theresa Guzman Stokes (who goes by 'Soni'), and a close up of the award. 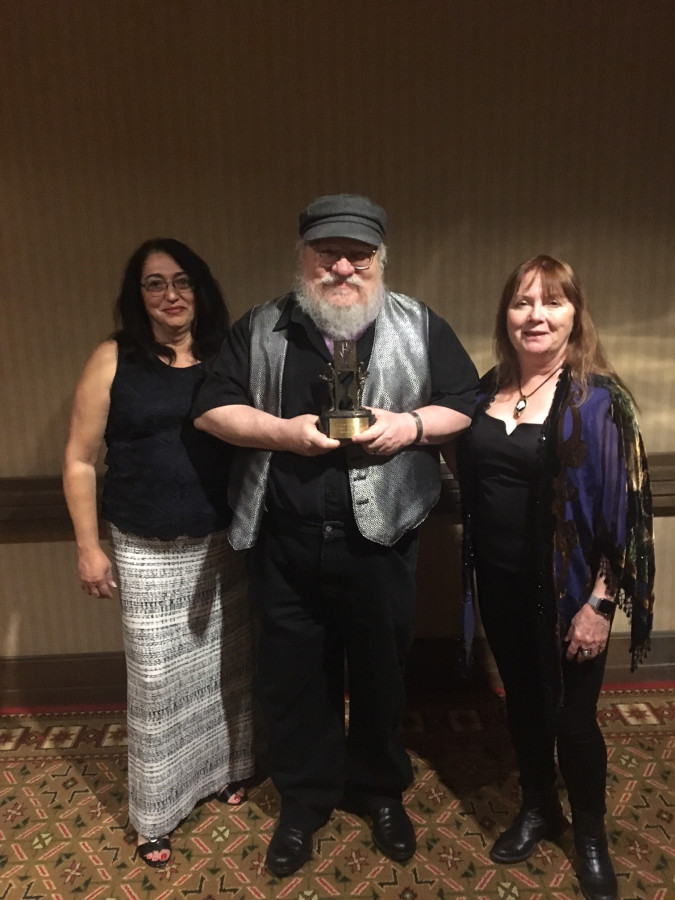 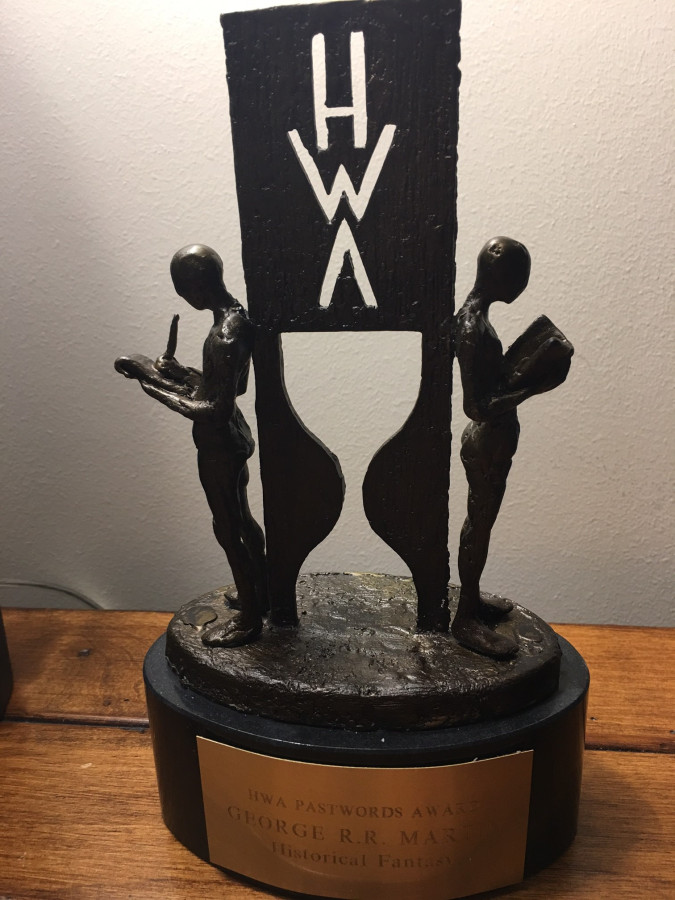 It was a fun evening.

If you'd like to know more about the Historical Writers of America, they have a website here: http://historicalwritersofamerica.org/

I do think they need to change their name, though. All these HWAs are confusing. Way back when, I was actually a founding member of the horror writers group under its original name: the Horror and Occult Writers League, or HOWL. A much more original and creative name, I thought, but they got stuffy and opted for 'dignity.' They should go back to HOWL, I say... and maybe one of the historical groups should call itself the Historical Authors instead of writers, which would make them HAA... but then they'd get confused with a comedy writers organization... oh, well, I don't know.

In any case, I appreciate the award, and all the kind words about my work. It's kind of cool to learn that even writers of honest to god real historical fiction and non-fiction enjoy my own fake histories.
Collapse