It's Banned Books Week, and there's nothing I hate more than banning books (no, not even the New England Patriots and Dallas Cowboys), so I'm doing my little bit with a fundraiser for the COMIC BOOK LEGAL DEFENSE FUND.

The CBLDF is a non-profit organization dedicated to protecting the rights of free speech and free expression in comics books, graphic novels, and related fields. My own roots as a "funny book" fan go all the way back to the letters of comment I published in FANTASTIC FOUR, AVENGERS, and other Marvel comics back in the early 60s. I also attended the very first comicon, and won my first writing prize for an amateur prose superhero yarn (an Alley Award, which I never received, sob), so comics are a medium dear to my heart... as anyone who has ever read my own long-running WILD CARDS series of mosaic novels surely knows.

Accordingly, I've donated one hundred (100) signed hardcover copies of the Wild Cards mosaic novel INSIDE STRAIGHT to the Comic Book Legal Defense Fund, to be offered to the first hundred donors making contributors of $100 or more. 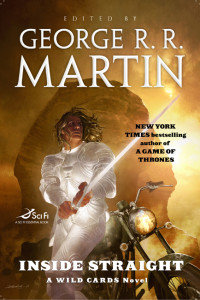 The copies have all been signed by yours truly... as well as by my assistant editor, Melinda M. Snodgrass, and writers Daniel Abraham, Carrie Vaughn, Michael Cassutt, John Jos. Miller, and Caroline Spector. Which is to say, by ALL the contributors save for the elusive S.L. Farrell. This "Seven Signature Special" will continue only so long as the supplies last.

All contributions to the Comic Book Legal Defense Fund are tax deductible.

For more than 25 years, the CBLDF has been protecting the comics medium in courtrooms, libraries, and classrooms all over the United States by providing legal counsel and education on issues relating to comics censorship. A proud sponsor of Banned Book Week, the CBLDF is supporting several events around the country supporting the Freedom to Read, and offers a rich range of resources about banned comics and how to defend against challenges on www.cbldf.org.

Most recently, the CBLDF has called for a school district in Connecticut to rescind a graphic novel ban carried out against the district's own policies. In the past year the Fund prevailed in a case defending an American comic book reader who faced wrongful criminal charges in Canada because of Japanese comic book images on his laptop computer. An amicus brief they authored was also cited by the U.S. Supreme Court's decision to strike down an unconstitutional California law seeking to regulate violent content in the case Brown v. EMA.

"The CBLDF is a small organization with a powerful mission, and that work is only possible because of the generous contribution of our supporters," CBLDF Executive Director Charles Brownstein says. "We're extremely grateful to Mr. Martin for this generous contribution, and to everyone who will have the opportunity to own one of these unique signed novels. The CBLDF is a tremendous team effort between the creative and readership communities who value the importance of intellectual freedom for comics and all media. We're thankful to be celebrating Banned Books Week with George in this extraordinary way."

To make your contribution, and order your copy of INSIDE STRAIGHT, go to:

All monies should go direct to the CBLDF, not to me.

Sorry, I cannot add a personal inscription to your book. The copies have already been signed by all concerned (save for Mr. Farrell), and are on their way to the CBLDF.

Free speech is one of the cornerstones of our democracy, yet somehow it is always under attack. The world is full of people who think they know better, and want to tell you what you should read, what you should write, what you should see. Christian fundamentalists, Muslim extremists, the right, the left... everybody seems to have a book or two they want banned, an idea or two they don't want expressed. Well, I say it's spinach, and I say the hell with them.

Donate some money, get a tax deduction, visit the world of the Wild Cards, and add a swell signed collectible to your collection... that's a win, win, win, win if I ever heard one.