If you're one of the sad unfortunates who missed the third Dunk & Egg novella when it appeared in WARRIORS, the big cross-genre anthology I co-edited with Gardner Dozois, here's another chance to read "The Mystery Knight."

Demon anthologist John Joseph Adams is reprinting the novella, along with lots of other swell stories by the likes of Ursula K. Le Guin, Patrick Rothfuss, Tad Williams, and other kickass epic fantasists. 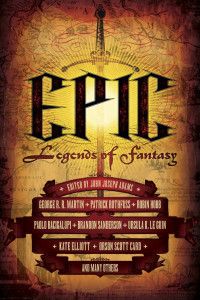 Check out JJA's site for more info on EPIC: http://www.johnjosephadams.com/epic/

Meanwhile, I will get back to work on the fourth Dunk & Egg novella (as yet untitled), which is scheduled to appear in DANGEROUS WOMEN aka FEMMES FATALE aka The Next Giant Cross-Genre Anthology by Martin and Dozois))
Tags: anthologies, dunk & egg
Subscribe