Who says that Cersei Lannister is a cold, calculating, uncaring sort of queen?

Far from it. Her Grace loves the simple folk, and to prove it, here's a swell new picture of her getting all nekkid just to help them buy some cows, sheeps, and goats... 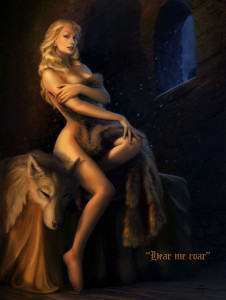 The art is by Lee Moyer, a lover of the classic pin-up girl and doer of good deeds. It's part of his soon-to-be-released 2013 Literary Pin-Up calendar, all of the proceeds of which will go to Worldbuilders on behalf of Heifer International.

Cersei will be in good company. This year's calendar also features brand new, never before pin-ups of characters created by Peter S. Beagle, Ray Bradbury, Patricia Briggs, Jim Butcher, Jacqueline Carey, Neil Gaiman, Charlaine Harris, Robin Hobb, N.K. Jemisin, Terry Pratchett, and Patrick Rothfuss. All guaranteed saucy. So if you're a lover of fantasy, of "good girl" art, literature, the female form, or feeding the world's poor... actually, helping them feed themselves... this is a calendar you need to have. 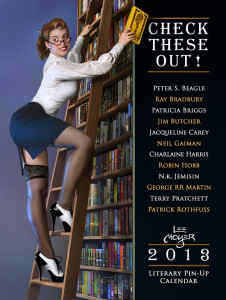 Best of all, you can pre-order NOW. Just go to:

My hat is off to Lee Moyer, and to the tireless and talented Patrick Rothfuss, who put this whole thing together. "If we can get the word out," Rothfuss writes, "I know it will raise a lot of money for Heifer International." Let's make it so, boys and (yes) girls.
Tags: calendar, charity
Subscribe