The first of March already... damn, where does the time go?

Only thirty-one days till the third season debut of GAME OF THRONES on HBO.

And only TEN days till Hugo nominations close! So let me make a few more recommendations for your consideration, boys and gals. Resuming with "the Big One," the Hugo for Best Novel.

I cannot claim any great breath of knowledge of this year's top contenders. While I read constantly and voraciously, my bookshelves contain all sorts of things, not just the current year's SF and fantasy. Looking back, now that Hugo time is at hand, I find I read a lot of history and historical fiction last year, some non-fiction, a number of mysteries, and a bunch of older books, published in 2011 or 2010 or 1999 or 1953 or whenever. None of which are eligible for Hugos. I have also dipped into (but not always finished) a bunch of bound gallerys and ARCs of as-yet-unpublished novels that may be eligible for awards next year, but not this year.

Which is not to say that I did not read anything in the field this year. I did, and some of what I read I liked a lot.

Last year I recommended the first book of James S.A. Corey's Expanse series, LEVIATHAN WAKES... and a lot of people agreed, since LEVIATHAN was nominated for a Hugo (to the evident annoyance of one prominent writer who was not) and actually finished third in the final voting, two places ahead of my own A DANCE WITH DRAGONS, which fact Ty does not hesitate to bring to my attention on a regular basis. (("James S.A. Corey," of course, is actually the pseudonym of my assistant Ty Franck writing in collaboration with my friend Daniel Abraham).

Well, in 2012 the second volume of the Expanse series, CALIBAN'S WAR, was published. And far from being a victim of sophomore slump, that bastard Jimmy Corey seems to have done it again. CALIBAN'S WAR is even better than LEVIATHAN WAKES. It's old-fashioned space opera, the kind of SF that I cut my teeth on, a real page-turner set in a vividly imagined solar system, squarely in the tradition of Heinlein and Asimov and Rocky Jones, Space Ranger (lacking only Pinto Vortando), superlatively written. Books like this were what made me an SF fan to begin with. CALIBAN'S WAR was the best pure SF I read in 2012, and I will be nominating it for the Hugo. 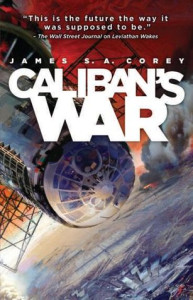 I read more fantasy than SF last year. Understandably, as the publishers send me just about every epic fantasy they are putting out for blurbs. This is a golden age for fantasy, and there's some great work being done. 2012 was no exception. I enjoyed Saladin Ahmed's THRONE OF THE CRESCENT MOON, an old-fashioned sword-and-sorcery adventure with an Arabian Knights flavor, rather than the usual "medieval Europe" setting. There was a new Joe Abercrombie as well, and though I didn't feel RED COUNTRY quite measured up to last year's THE HEROES, Abercrombie is always worth reading. No new Rothfuss last year, though, and nothing by Scott Lynch... or that Martin guy, for that matter.

My favorite fantasy from 2012, all in all, was the second volume of Daniel Abraham's Dragon's Path series, this one entitled THE KING'S BLOOD. Like Jimmy Corey, Abraham just keeps getting better and better. It has been said, and truly, that Dragon's Path is perhaps not so innovative as Daniel's first fantasy series, the Long Price Quartet... but innovation is not the only value worth consideration while weighing a work of art. The world of Dragon's Path is considerably larger, older, and more colorful than that of Long Price, the characters are just as well drawn, the prose as rich and evocative, the plotting full of devious and delightful twists and turns. Abraham belongs in the first rank of today's fantastists, I think, right up there with Abercrombie, Lynch, Rothfuss, Robin Hobb, and the like. And THE KING'S BLOOD deserves a Hugo nomination. 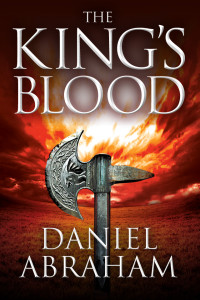