Got some exciting news for those of you out there who still use calendars... ((yes, yes, I know we have this interwebbie thing now, nobody needs to hang paper on their wall any more to know what day it is, calendar sales are way way down, I don't care, I am a dinosaur and a proud dinosaur and I LOVE calendars, so there))

The 2013 Ice & Fire calendar, with its spectacular artwork by Marc Simonetti, has done very well indeed, thank you. (And I hope all of you remember Marc when it comes time to make your Hugo nominations for Best Professional Artist). 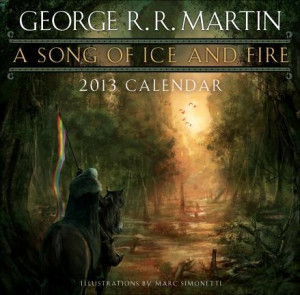 The 2014 Ice & Fire calendar, illustrated by the amazing Gary Gianni, is almost complete. Those of you who were at Chicon may have seen some of Gianni's paintings at the Brotherhood Without Banners party, since he was kind enough to display half a dozen of them exclusively for the BWB and their guests. He's working on the twelfth and final painting now, and we expect the calendar to debut at this summer's San Diego Comicon. 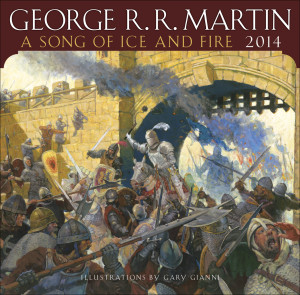 Which means that is time to get cracking on the 2015 Ice & Fire calendar, and we've done just that. I am absolutely thrilled to announce that the artwork for the 2015 calendar will be provided by a man who truly needs no introduction, the Hugo-award-winning artist extraordinaire DONATO GIANCOLA.

If you are one of the six or seven people in fandom unfamiliar with Donato and his artwork, I suggest you remedy that lack immediately by paying a visit to his website at www.donatoart.com

Needless to say, I am a huge huge fan of his painting. This will not be Donato's first visit to Westeros. Years ago, he did a gorgeous painting of Melisandre of Asshai as the cover for the special Westeros issue of DRAGON magazine. Ever since, I have been wanting him to do more... and now at last it seems I'll get my wish.

Oddly enough, only a week ago or so I was in DC, enjoying the amazing exhibition of Pre-Raphaelite art that has just opened at the National Gallery. Looking over Donato's on-line gallery with that so fresh in mind, it occurs to me that his own paintings could have fit right in with those of Millais, Hunt, Rossetti, and the other stalwarts of the Pre-Raphaelite Brotherhood.

My friends at Bantam tell me that Donato is already hard at work, "far into reading the entire series, studiously taking notes, making thumbnails, etc." I expect we'll see some gorgeous things from him.

He has some tough acts to follow, of course. But hey, he knew the job was dangerous when he took it. I expect he is equal to the task.

And I must say, I am very pleased and proud with what our annual Ice & Fire calendar has become. Michael Komarck (2009), Ted Namisth (2011), John Picacio (2012), Marc Simonetti (2013), Gary Gianni (2014) and now Donato Giancola... if you love great fantasy art, it doesn't get much better than that.
Tags: a song of ice and fire, bantam spectra, calendar
Subscribe