I get emails all the time from fans asking me to recommend books for them to read "while I am waiting for your next one."

I can't possibly reply to all my emails, of course. But I do reply to some, when the mood strikes me. And I am always glad to recommend good books. There is so many of them out there that do not get half the attention that they deserve.

For some readers I like to draw attention to the classics of our genre. It never ceases to amaze me to discover that some of my own fans have never heard of all the great fantasists who came before me, without whom A SONG OF ICE AND FIRE could never have been written... without whom, in truth, there might not be a fantasy genre at all. If you have enjoyed my own fantasy novels, you owe it to yourself to read J.R.R. Tolkien (LORD OF THE RINGS), Robert E. Howard (Conan the Cimmerian, Kull of Atlantis, Solomon Kane), C.L. Moore (Jirel of Joiry), Jack Vance (THE DYING EARTH, Lyonesse, Cugel the Clever, and so much more), Fritz Leiber (Fafhrd and the Grey Mouser), Richard Adams (WATERSHIP DOWN, SHARDIK, MAIA), Ursula K. Le Guin (Earthsea, the original trilogy), Mervyn Peake (GORMENGHAST), T.H. White (THE ONCE AND FUTURE KING), Rosemary Sutcliffe, Alan Garner, H.P. Lovecraft (more horror than fantasy, admittedly), Clark Ashton Smith, and... well, the list is long. But those writers should keep you busy for quite a while. You won't like all of them, perhaps... some wrote quite a long time ago, and neither their prose nor their attitudes are tailored for modern attention spans and sensibilities... but they were all important, and each, in his or her own way, was a great storyteller who helped make fantasy what it is today.

Maybe you've read all the fantasy classics, however. I have lots of readers for whom that is true as well. Those I like to point at some of my contemporaries. As great as Tolkien, Leiber, Vance, REH, and those others were, THIS is the golden age of epic fantasy. There have never been as many terrific writers working in the genre as there are right now. Actually, there has never been so much epic fantasy published than right now, which means a lot of mediocre and downright terrible books as well, since Sturgeon's Law still applies. But I prefer to talk about the good stuff, and there's a lot of that. Just for starts, check out Daniel Abraham (THE LONG PRICE QUARTET, THE DAGGER AND THE COIN, Scott Lynch (the Locke Lamora series), Patrick Rothfuss, Joe Abercrombie (especially BEST SERVED COLD and THE HEROES)... they will keep you turning pages for a good long while, I promise...

Fantasies are not the only books I recommend to my readers, however. It has always been my belief that epic fantasy and historical fiction are sisters under the skin, as I have said in many an interview. A SONG OF ICE AND FIRE draws as much on the traditions of historical fiction as it does on those of fantasy, and there are many great historical novelists, past and present, whose work helped inspire my own. Sir Walter Scott is hard going for many modern readers, I realize, but there's still great stuff to be found in IVANHOE and his other novels, as there is in Sir Arthur Conan Doyle's WHITE COMPANY (he write more than just Sherlock Holmes). Thomas B. Costain (THE BLACK ROSE, THE SILVER CHALICE) is another writer worth checking out, along with Howard Pyle, Frank Yerby, Rosemary Hawley Jarman. Nigel Tranter lived well into his 90s, writing all the while, and turning out an astonishing number of novels about Scottish medieval history (his Bruce and Wallace novels are the best, maybe because they are the only ones where his heroes actually win, but I found the lesser known lords and kings equally fascinating). Thanks to George McDonald Fraser, that cad and bounder Harry Flashman swashed and buckled in every major and minor war of the Victorian era. Sharon Kay Penman, Steven Pressfield, Cecelia Holland, David Anthony Durham, David Ball, and the incomparable Bernard Cornwell are writing and publishing firstrate historical fiction right now, novels that I think any fan of A SONG OF ICE AND FIRE would find easy to enjoy.

And then there is Maurice Druon. Which is actually why I called you all here today, boys and girls.

Look, if you love A SONG OF ICE AND FIRE, and want "something like it" to read while you are waiting (and waiting, and waiting) for me to finish THE WINDS OF WINTER, you really need to check out Maurice Druon and THE ACCURSED KINGS.

I never met Druon, alas (he died only a few years ago, and I regret that I never had the chance to shake his hand), but from all reports he was an extraordinary man. He was French, highly distinguished, a resistance fighter against the Nazis, a historian, a member of the French Academy... well, you can read about his life on Wikipedia, and it makes quite a story in itself. He wrote short stories, contemporary novels, a history of Paris... and an amazing seven-volume series about King Philip IV of France, his sons and daughters, the curse of the Templars, the fall of the Capetian dynasty, the roots of the Hundred Years War. The books were a huge success in France. So huge than they have twice formed the basis for television shows (neither version is available dubbed or subtitled in English, to my annoyance), series that one sometimes hears referred to as "the French I, CLAUDIUS." The English translations... well, the seventh volume has never been translated into English at all, and the first six are long out of print, available only in dusty hardcovers and tattered paperbacks from rare book dealers found on ABE.

But that's about to change, thanks to my own British publisher, HarperCollins, who are bringing THE ACCURSED KINGS back into print at long last in a series of handsome new hardbacks. The first volume, THE IRON KING, has just been published... with a brand new introduction by some guy named George R.R. Martin. 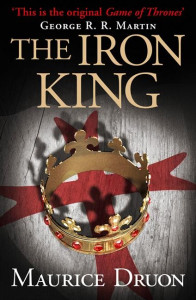 At the moment, alas, there's no plan for American editions, but readers in the US (and around the world) can order the Druon novels from their favorite online bookseller through the wonders of the internet.

The best news... at least for me... is the HarperCollins not only intends to release new English editions of the first six novels of THE ACCURSED KINGS, but also... finally!!!... translate the seventh and concluding volume. (Talk about waiting a long time for a book).

Anyway... whether you want something else to occupy your time while waiting for THE WINDS OF WINTER, or you're just looking for a good read... you won't go wrong with Maurice Druon, France's best historical novelist since Dumas Pere.
Tags: fantasy, historical fiction, reading, reviews
Subscribe
Previous
← Ctrl ← Alt
Next
Ctrl → Alt →
Previous
← Ctrl ← Alt
Next
Ctrl → Alt →