Dunk and Egg Return to Comics

Big news in the world of comic books today!

The graphic novels of the first two Dunk & Egg adventures, THE HEDGE KNIGHT and THE SWORN SWORD, have been unavailable for several years, ever since the Marvel Comics editions went out of print. During that time, the prices for those books have steadily risen in the collector’s market, and I’ve received numerous emails from readers begging me to get them back in print.

Their wish is about to be granted.

Today, in Seattle, Amazon Publishing formally announced the launch of JET CITY COMICS, a new publishing imprint focused on producing comics and graphic novels in both electronic and paper formats. Jet City will be launching with titles from Hugh Howey (bestselling author of WOOL), Hugo-award winning novelist Neal Stephenson… and me.

First up (from me) will be MEATHOUSE MAN, the graphic novel, based on the most twisted and disturbing story I ever wrote, wonderfully adapted, penciled, inked, and colored by the amazing Raya Golden. That’s scheduled for release in October 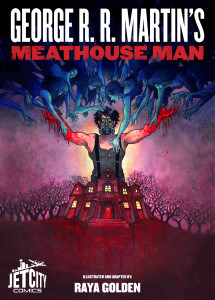 Dunk and Egg will follow. Jet City will be putting both THE HEDGE KNIGHT and THE SWORN SWORD back into print. . . and releasing ebook versions for the Kindle, making both titles available electronically for the first time.

New Jet City issues will publish on Kindle as standalone comics, as serialized comics released over multiple episodes, and as bundled graphic novels, with print editions available at amazon.com and other comics retailers.

According to Amazon’s official press release, Jet City will publish the following comics in 2013:

• An original comic adaptation of George R.R. Martin’s story “Meathouse Man,” illustrated by Raya Golden, and a re-release of “The Hedge Knight” by Ben Avery and Mike S. Miller, a prequel set in the universe of Martin’s best-selling A Song of Ice and Fire epic fantasy series (the inspiration for the hit HBO program Game of Thrones). “Meathouse Man” will be released as a single issue comic in digital format in October 2013; “The Hedge Knight” will be released as a collected graphic novel in print and digital formats in November 2013; and its sequel, “The Sworn Sword,” will follow in early 2014.

• An adaptation of Hugh Howey’s bestselling dystopian novel Wool by comics veterans Jimmy Palmiotti, Justin Gray, and illustrator Jimmy Broxton, where the remnants of humanity live in a massive silo hundreds of stories below the surface of the ruined and toxic landscape of Earth. Wool was a #1 bestseller in the Kindle store and is one of the most-reviewed science fiction novels on Amazon, with almost 6,000 customer reviews. It will be released as a Kindle Serial, as six individual comics issues starting in October 2013, followed by a collected graphic novel in 2014.

• Six original comics from The Foreworld Saga, the bestselling alternate history series that began with The Mongoliad (a serialized novel collaboratively written by a team of authors led by Neal Stephenson, Greg Bear, and Mark Teppo). The first Foreworld comic, “Symposium #1” by author Christian Cameron and Illustrator Dmitry Bondarenko, details the origins of the Shield-Brethren in Ancient Greece in the days following Athens crushing defeat to Sparta in 394 BC. It goes on-sale today, with new installments releasing monthly before being collected in a series of graphic novels in 2014.

In the official press release, Alex Carr, Senior Editor at Jet City, says, “It’s a dream to work with superstar authors like George, Hugh and Neal on the launch of a new imprint. Millions of fans have read and loved their novels, and with Jet City we look forward to opening up these iconic worlds to new audiences. We’re working with an incredible, hand-picked team of comics professionals, writers, artists, and translators, who have done an amazing job developing and expanding these inventive stories. I’m looking forward to the response from comics readers and fans.”

“Comics and graphic novels, especially in digital format, represent a unique area for innovation,” said Jeff Belle, Vice President of Amazon Publishing. “Our focus will be on adapting great books for this medium as a means of expanding the audience for our authors, pushing boundaries with new ideas that combine visual and narrative storytelling, and creating compelling new experiences for readers.”

I’m excited to be published by Jet City, and delighted that they will be putting THE HEDGE KNIGHT and THE SWORN SWORD back into print, for all those fans who have been asking for them. 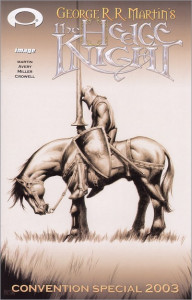 “Ah, but what about THE MYSTERY KNIGHT? “ I hear you asking. The third Dunk and Egg novella, originally published in my anthology WARRIORS, has not yet been adapted to comics.

But that’s about to change. I’m delighted to say we’ve put the old gang back together. Dunk and Egg are returning to comics. Ben Avery will be scripting, and Mike S. Miller will once again be doing the art. This time it will be Random House, the publisher of the SONG OF ICE & FIRE novels and the on-going GAME OF THRONES graphic novel adaptations, doing the book.