The Prince of Chaos is Coming...

And no, I don't mean the Roger Zelazny novel, I mean the one by Horatio King.  Who is me.  Sort of.  But not really.

This PRINCE OF CHAOS is a fictional fantasy novel by a fictional author who is not me (not at all, no sir, definitely not), as seen in THE CALLBACK QUEEN, a new romantic comedy out of Ireland that debuts tomorrow at the Jean Cocteau Cinema. 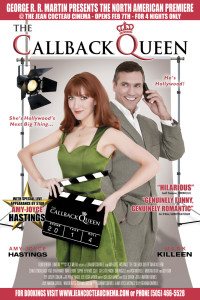 Hundred of actors auditioned for roles both large and small in HBO’s GAME OF THRONES. Only a handful were cast. Thousands more tried to get auditions, but were never given the chance to read. In the old days, aspiring stars sent off resumes and 8x10 glossies to directors, producers, and casting directors. They still do that. . . but these days some also upload their own auditions on YouTube, Vimeo, and similar sites on the internet.

Amy-Joyce Hastings was one of those, as I discovered one day when dozens of my fans and readers began to send me emails with links to a reading by a lovely young red-haired Irish actress that I’d never heard of. They liked what she’d done, and so did I, when curiosity drove me to click on one of those links and take a look. So I dropped her a note, told her the name of our casting director, wished her luck. . . and thought no more of it, until I heard about The Callback Queen.

Amy-Joyce never got to audition for GAME OF THRONES. That’s something she has in common with thousands of other actors from all over the world. Unlike all the others, however, Amy-Joyce took life’s lemons and made lemonade; she shared her experiences with her friend Graham Cantwell, an Irish filmmaker, who took her tale about a young actress attempting to land a role in an epic fantasy, and turned it into a movie... a romantic comedy about moviemakers and aspiring actors that pokes fun at the whole casting carousel… starring Amy-Joyce Hastings.

So now the tale comes full circle.  We're delighted to be able to present the North American Premiere of THE CALLBACK QUEEN right here in Santa Fe, tomorrow evening.  Amy-Joyce Hastings and writer-director Graham Cantwell are flying in from Ireland for the event, and will introduce the film and answer questions afterwards, and we'll also be having a small post-screening reception at the Cocteau's new bar, where you can meet Graham and Amy-Joyce and sample a "Call Me For Comfort," our special CALLBACK QUEEN cocktail.

So see you there.  But don't ask me to sign your copy of PRINCE OF CHAOS.  I am not Horatio King.  (They never even asked me to audition for the role).

P.S.  And yes, your eyes are not deceiving you, the role of the director in THE CALLBACK QUEEN is being played by Mero, the Titan's Bastard.  Someone must have sewed his head back on after Daario hacked it off.  It's a small world, it is, be it Hollywood or Westeros.
Tags: game of thrones, jean cocteau, movies
Subscribe