Okay, okay, we broke the internet AGAIN.  Sorry about that.  I'm not to blame this time, it was HBO GO... and all you people who have HBO GO and keep trying to watch the episodes on your computers instead of on your television sets.

Anyway, the internet has been fixed, they tell me, and "Two Swords" has come and gone.  How about Maisie and Rory?  Was that great, or what? 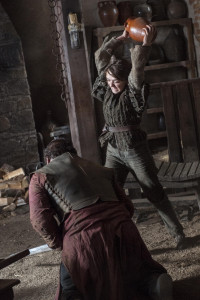 Of course, there were lots of other great stuff in the episode too.  (Yes, I know, I'm prejudiced).  Tyrion, Tywin, Jaime, Cersei, Shae, Sansa, Jon and Sam, the return of Ser Dontos, an amazing introduction of the Red Viper and his paramour.   But that last scene kicked ass.

(But no, please DON'T discuss it here, I prefer you take discussions, debates, recaps, and analysis to Westeros, Winter Is Coming, Tower of the Hand, or Television Without Pity).