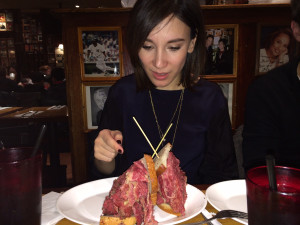 Sibel looks stunned, and no wonder.  That sandwich has defeated me on several occasions

(This was taken last month, after the season four fan screening in Brooklyn).

I am pleased to report that in the end, Sibel was triumphant... though she did require help.

It was a great evening.  We have the best cast in television, and Sibel is a big part of that.