I don't recall when or where I first met Kirby McCauley.  It was forty years ago at least, at some convention, probably on the east coast... a Lunacon or a Philcon, perhaps, or maybe at the Nebula Banquet.   I went to a lot of cons in those days, when I could afford it.  So did Kirby.  I was a young writer, still years away from tackling my first novel, but selling short stories, and losing Hugos and Nebulas.  Kirby was a young agent, fresh from Minnesota, newly come to New York City, still building up his client list.  All the established names in the field were signed with established agents, with Henry Morrison and Scott Meredith and Virginia Kidd and the like, so Kirby reached out to the kids (well, we were in our twenties, mostly, but we sure seem like kids when I look back) just starting out, recruiting promising young talent from the ranks of the unagented young dreamers who still did cartwheels when they sold a story to Ted White at AMAZING for a penny a word (on publication).

Kirby was good-looking, fast-talking, charming... and he was there with us in the con suite  The established agents of the day never came to cons.  Kirby came to all of them.  You'd find him in room parties, laughing, joking, flirting with the pretty girls, staying up till dawn... and talking about books and stories and writers.  He was not your father's agent, not a beefsteak-and-martini lunch kind of agent, not a three-piece suit kind of agent.  He was jeans and a smile and a beer in his hand.   He was One of Us.  He was a fan.   He knew SF, fantasy, horror.  Robert E. Howard, H.P. Lovecraft, Clark Ashton Smith, he knew more about all of them than you did.  Mystery writers too.

It was maybe our third or fourth meeting when he asked me (at a party) if I had representation.  I did... but only in Germany.  (I had taken on another start-up, a small German agency called UTOPROP, the year before, to sell translation rights to my short stories in West Germany).  I didn't need representation, I told Kirby.  I had no plans to write a novel, and you didn't need an agent to sell short stories.  And I'd sold two books on my own, an anthology and a collection.  One of these years, I knew, I would write a novel, and that's when I would need an agent.... but when the time came, I figured I'd be well enough known to get one of those big established agencies, not some guy my own age whose list was made up mostly of writers even newer and greener than I was.  So I said, "thanks, but no thanks."

But Kirby did not give up.  He asked me again, at the next con.  He read my stories in ANALOG and AMAZING and F&SF, and wrote me about them, suggesting clever ways they could packaged into collections or expanded into novels.  When Lisa Tuttle and I published our novella "The Storms of Windhaven" in ANALOG, he was the first to see the novel in it, and wrote to say how much he'd like to sell it.  Persistance and enthusiasm will win a writer's heart every time.  He wore me down.  (And those big, well-established agents still had yet to notice my existance).  Finally... I don't recall just when... I agreed to let Kirby McCauley represent me, everywhere but in Germany.

That was the best decision I ever made.

Little did I know, but I'd just hitched my fledging career to a star.  I'd bought Apple at a penny a share.  I'd won the bloody lottery.  I might have had a career anyway, sure... I am nothing if not a writer, I would have written my stories and published (eventually) my novels, but the success that I enjoy today is built in large part on the foundations that Kirby laid for me back in the 70s and 80s.

The young, fast-talking guy from Minnesota became, for a good ten years or more, the Best Agent in the World. 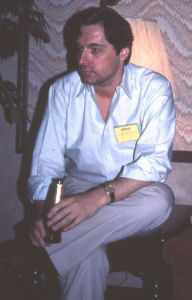 His stable, in the beginning, was made up almost entirely of young punks like me, and the estates of dead writers, some of them on the verge of being forgotten.  But Kirby loved the classic stuff, and somehow, with his relentless hustling, got a lot of their books into print.  For the newcomers, he did even better.  Back in 1974 and 1975, the standard advance for a first novel  was $3,000.  A few of my contemporaries (not agented by Kirby) got half that.  If you had won an award, and had a good agent, maybe you'd get $4,000.  I won a Hugo Award for "A Song for Lya" in 1975, so I was dreaming big when I finally wrote my first novel, AFTER THE FESTIVAL (published as DYING OF THE LIGHT).  "See if you can get me $5,000," I said to Kirby when I gave him the manuscript, thinking I'd made an outrageous demand.  He laughed.  "I think we can do better than that," he said.  He got half a dozen publishers bidding on the book, and in the end I collected more than ten times the standard advance for a first novel.

He did even better when Lisa Tuttle and I finally wrote that WINDHAVEN novel.   And a few years later, when I wrote my historical horror novel FEVRE DREAM, he knew at once that it should not be published as a genre title, and deftly moved it to another imprint at the same publisher, while keeping both my old and new editors happy, and getting me my biggest advance to date.  With THE ARMAGEDDON RAG, a few years later, he raised the bar still higher and suddenly I was drawing down six figures.

I was by no means his biggest success story, either.  He did as well or better for a dozen other young writers on his list... and one of them, this guy from Maine named Stephen King, did better than all of us together.  It is probably an exaggeration to say that Kirby McCauley was entirely responsible for the huge SF boom of the late 1970s and the horror boom of the early 1980s... but he was sure as hell helped.  He was one of the first to see what was happening, and to take advantage of it for his clients.  Kirby revolutionized agenting in SF and fantasy and horror.   At a party there was no one more genial or friendly, more fun to share a beer with... but editors and publishers soon learned to fear his skill as a negotiator.  He would NOT take no for an answer.  And he would not take peanuts for a book, either.

The older, established, three-piece suit agents were soon scrambling to keep up with him.  Meanwhile, their clients were leaving them, moving over to Kirby in droves.  And who could blame them?  Snot-nosed punks like me were drawing down advances ten and twenty times as large as writers who had been publishing for decades, because we had the good fortune to be agented by Kirby McCauley.

Through all of this, Kirby remained a fan as well.  He had always loved horror and fantasy, and in 1975 he teamed with several other leading fans, editors, and booksellers to found the World Fantasy Convention, as an alternative to the long-running World Science Fiction Convention.  The first one, in Providence, Rhode Island, he chaired, and remained on the board for years to follow.  He helped to establish the World Fantasy Awards, the "Howards" or "Howies," given annually by a panel of judges to the year's best fantasy and horror.

He was also an editor and anthologist.  DARK FORCES, his landmark horror anthology, remains to this day perhaps the greatest single horror ever published, and was recently reissued in a 26th Anniversary Edition.

Things started to go wrong for Kirby around 1985 or so, though.  Too many clients had signed on, maybe.  Kirby was nothing if not loyal, and stayed with the clients he had started out with long after any other agent would have cut loose the ones who had not made it.  So his stable got bigger and bigger.  He hired assistants, brought in other agents to help, but he was never good at delegating... and besides, none of us wanted to be assigned to a sub-agent, we wanted Kirby.  There were other problems.  An excess of success, maybe.  I was off in Hollywood by that time, working in television in the aftermath of the commercial failure of THE ARMAGEDDON RAG (even Kirby had not been able to place my proposed fifth novel, BLACK AND WHITE AND RED ALL OVER, though he tried his damndest, with the same persistance that he had shown when he tried to sign me), so I wasn't privy to much of what went on... but all of a sudden clients were leaving the agency, instead of signing on.  BIG clients.  Some of the agents Kirby had brought in to help left as well, taking more clients with them.  And Kirby... well, there were personal problems, and they ought to remain personal.

The dark years did not last forever, though.  Things stablized with the arrival of Kirby's sister, Kay McCauley, who moved to New York and proved to be as splendid a representative as her brother was, as those of us who stayed the course soon realized.   And Kirby came back strong.  In 1994, when I sent him two hundred pages of a fantasy I had been working on for a few years, and asked him if he could maybe sell it for enough money to get me out of television, he chuckled and said he thought maybe he could.  Turned out, it was 1976 all over again.  Kirby sent the book all over New York, got six publishers to submit offers, and soon had two of them bidding each other up and up until... well, Bantam won, and I popped a bottle of champagne, bid farewell to television, and set to work on A GAME OF THRONES.

I don't believe Kirby ever fully retired.  In recent years, however, I heard from him less and less, as he left most of the day-to-day running of his agency to his sister Kay, who does it admirably.   He no longer attended cons or other fannish events, though he kept saying that one of these years he wanted to return to the World Fantasy Convention, the convention he helped to found.  Last year, when I was in New York, Kirby and Kay and Parris and I went out to City Island, to eat crabs and clams and fried shrimp in a seafood shack over the water.  He was the same old Kirby, bright, charming, laughing, full of stories.  We talked about Alfie Bester and H.P. Lovecraft and Robert E. Howard.   It was a great dinner.

He was the best agent any writer could hope for.  He made amazing deals for me, helped launch my career in 1976, and relaunched me in 1994 when I came back from the dead.  Like Gatsby, he came out of the midwest to New York City, and made it his.  At his height, he owned the city.  He used to tell me tales of his trips to Paris with Stephen King on the Concorde, of his date with Mariel Hemingway.

But I will remember him best from the old days, the midnight room parties at Lunacon back when it was still at the old Commodore, eating greasy breakfasts with Howard Waldrop at MidAmericon in '76, sleeping on his couch in his old apartment on 26th Street because I could not afford a hotel room in Manhattan... a lot of writers slept on Kirby's couch in those days...