This year's shortlist for the World Fantasy Awards has been announced, and I am proud and pleased to learn that ROGUES is a finalist for the Howard as Best Anthology.

The winners will be announced at this year's World Fantasy Con in Saratoga Springs. Which I will not be able to attend, alas. I'd hoped to... the last WFC in Saratoga was great fun, and I loved the city, and the train ride up the Hudson from NYC... but the press of work, etc. 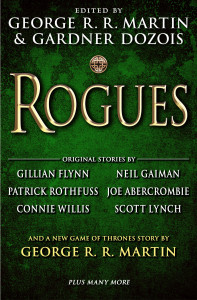 (I would be surprised if ROGUES actually won. It's up against some strong competition, including an anthology by my dear friend Ellen Datlow, and "Never get between Ellen Datlow and a World Fantasy Award" is right up their with "Never get in a land war in Asia" and "Never play poker with a man named Doc" where life's truisms are concerned. It is, however, an honor just to be nominated).
Tags: anthologies, awards, world fantasy convention
Subscribe