The Academy of Television Arts & Sciences announced this year's nominations for the Emmy Awards this morning, and HBO's GAME OF THRONES led the way with a whopping TWENTY-FOUR nominations. More than any other show this year, in any other category, be it drama, comedy, reality, talk, movie, miniseries, variety, documentary, what have you. 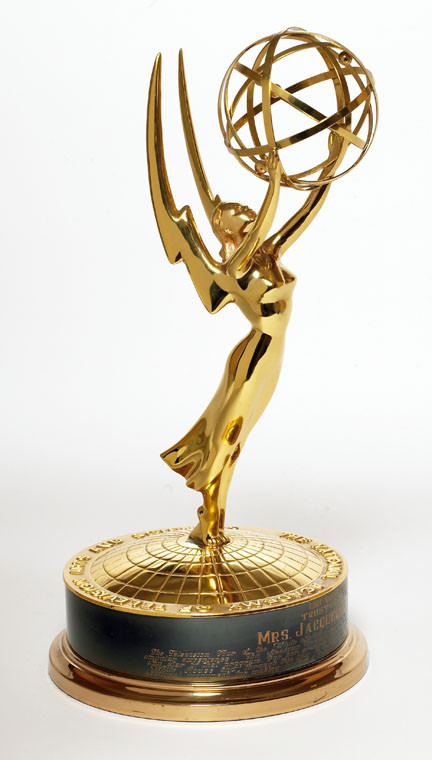 Congratulations are in order for David Benioff and D.B. Weiss, our showrunners, all our writers and directors and producers, our amazing cast and our incredible crew, and of course the good folks at Home Box Office, who made all this possible.

Here are this year's nominations for GOT:

It's an incredible list, I applaud everyone on it... and all of those who didn't make it either. GAME OF THRONES is what it is because of the untiring efforts of the best cast and crew in television today. Many were recognized by the Academy today for their work... but others, equally dedicated and talented, were not. But the show would not the hit it is without their talent and dedication.

The 24 nominations garnered by GAME OF THRONES is not only the highest number of any show this year, but among the highest ever received by a single series for a single season in the entire history of television. (For numbers geeks, the record remains 27, garnered by NYPD BLUE in 1994).

Today is a day for celebrations and congratulations, for popping champagne corks and raising toasts and exchanging thanks... but before we do too many cartwheels, it would be wise to remember that GAME OF THRONES also led the Emmy nominations last year, with 19 nods, only to get skunked on the night of the televised awards. The same as the year before, and the year before that. Like many fantasy shows before us, GOT is often honored for our special effects, costumes, makeup, stuntwork, set design, and cinematography (this year, please note, we have four of five finalists for cinematography), but seldom for writing, directing, or acting. Peter Dinklage's Emmy as Best Supporting Actor for season one remains the ONLY award the show has ever won in those categories, in fact.

Will that change this year? One can hope, I suppose.

But no matter what happens on Emmy Night, let me say once again that it truly is an honor to be nominated, especially given the competition. This truly is The Golden Age of Television, especially for drama. GAME OF THRONES faces the usual formidable competition for the "Big One," the award for Best Dramatic Series... but as distinguished a list as that is, there are so many incredible shows that did NOT make the cut that it boggles the mind. It's great to see BETTER CALL SAUL and ORANGE IS THE NEW BLACK on this list, but where is MASTERS OF SEX? THE KNICK? HALT AND CATCH FIRE? How about THE VIKINGS? I really thought JUSTIFIED might make it, for its final season. And OUTLANDER, how in the world did they overlook OUTLANDER, with its music and its costumes and its cinematography and the incredible performances of its three leads (especially Tobias Menzies in his double role)? Why is Nick Offermann not on the ballot for PARKS AND RECREATION? How could BIG BANG THEORY possibly fall off? Truly, the Academy (of which I am a member) moves in mysterious ways.

Even where GOT itself is concerned... I am thrilled to see both Emilia Clarke and Lena Headey among the nominees, but I wanted Maisie Williams and Sophie Turner and Natalie Dormer as well... it's great that two of our episodes got nominated for directing, but how did they overlook "Hardhome?"... and will Iain Glen and Conleth Hill and John Bradley West ever get any recognition, and...

Okay, okay, I know, I am being greedy, and every producer on every other show on television is probably saying the same things about his own cast just now. Let me just savor the moment.