Drumroll, please. The end is nigh. The climax approaches. Come Tuesday, I will be flying off to Spokane for Sasquan, Bigfoot's favorite worldcon. A week from Saturday, this year's Hugo Awards will be handed out, and we can put an end to the Puppy Wars... the 2015 edition, at least. There will be winners, there will be losers. Some will celebrate, some will weep. The vote totals will be parsed to a fare-the-well, no doubt, and spin doctors will be out in force.

The Puppies are already spinning, in fact. If you visit the Puppy blogs, you'll soon see that both the Sads and Rabids are busy constructing a nifty little narrative so they can claim victory no matter what happens. If nominees from the Puppy slates take home rockets, they won! If No Award prevails across the board, they won by destroying the Hugos. If non-slate finalists prevail, they won by "proving" something or other (since they keep changing their complaint, pretty much any result is guaranteed to prove something, if squinted at the right way).

All that is nonsense, of course. Like most Puppy claims have been from the start of this fiasco. Hypocrisy and delusion. Me and my friend Occam, we use a simpler razor. If the Puppies win, they win. If they lose, they lose. And No Award... well, that does make this a three-body problem rather than a simple binary one, but I will get to that later. So if the Hugo voters do indeed vote down the bulk of Puppy nominees, please stand up with me and blow a big loud raspberry at any Puppy who tries to claim that black is white, up is down, and losing is winning. It ain't.

WILL the Puppies lose?

I don't know. No one knows. Don't believe any fool who tries to tell you otherwise.

We do know that 5950 Hugo ballots were cast this year, smashing all previous records. You can find the details here: http://www.thehugoawards.org/2015/08/2015-hugo-voting-participation-smashes-records/ Last year, in contrast, only 3587 valid ballots were received, though Loncon was the largest worldcon in history. There's no doubt that the Puppygate controversy that has inflamed the internet since the nominations were announced drove those numbers. Supporting Membership rocketed up to unprecedented levels.

But who are all these new members? Over at FILE 770, the feeling seems to be that most of them are fans rallying to the defense of the Hugos. If so, the Puppy finalists will not only lose, they could very well be crushed, with lots of them finishing behind No Award. But some of the Puppies seem equally convinced that the new members are Puppy supporters, joining up in droves to stick it to those vile [fill in Brad Torgersen's offensive epithet of the week]. If that's true, the Puppies could actually win some rockets. Hell, if this betokens a mass migration of Gamergaters, the Rabids might even sweep the awards.

Which narrative is true? Which is deluded? No one knows, and no one is going to know until David Gerrold and Tanarive Due start to rip open those envelopes a week from Saturday.

For those on the edge of their seat wondering how this will all turn out, here's a hint: watch the Campbell Award.

Just as there are "swing states" and "swing counties" and "swing precincts" that act as predictors of the results of an election, this year's voting for the John W. Campbell Award (Not A Hugo) for Best New Writer will give us a strong indication of who is likely to prevail in all the races to follow. 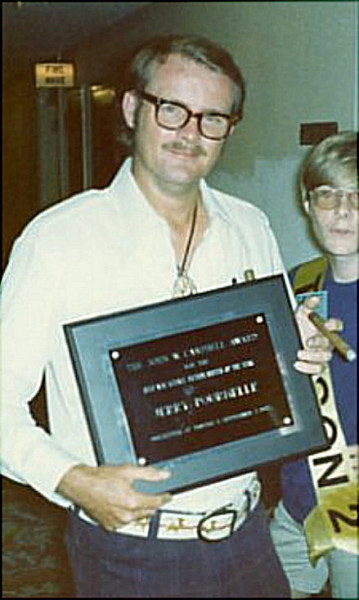 The Campbell Award is traditionally the first major writing award of the evening, given before any of the actual Hugo Awards. It is usually preceded by the First Fandom Award and the Big Heart Award, and sometimes by the Seiuns, the "Japanese Hugo." Some worldcons prefer to give the Seiuns at another time; I have no idea where Sasquan will come down on that. Most of the Puppies do not even know what First Fandom is, and I know damn well that none of them are going to win a Big Heart Award, now or ever, so we can be reasonably certain that those two awards will go as usual. Bringing us to the Campbell.

This year's Best New Writer finalists include Wesley Chu and four Puppies. Jason Cordova, Kary English, and Eric S. Raymond were on both slates, Sad Puppies and Rabid. Rolf Nelson, the fourth Puppy, was on the Rabid slate, but not the Sad.

In any normal year, Wesley Chu would have to be considered the overwhelming favorite to win the tiara. The Campbell has a two-year window of eligibility, and this is Chu's second and final year. He was a nominee last year as well, with the third-highest number of nominations, behind only the ultimate winner and a second-place finisher, neither of them eligible this year, so we know that a lot of fans already like his work. His body of work has only gotten stronger in the intervening year. And, honestly, bottom line, Chu is the best writer of this year's five... and that IS what the Campbell is supposed to reward after all, the Best New Writer.

If Wesley Chu takes the Campbell, as he should, I think we will be in for a fairly reasonable night in Spokane. There will be some winners from the slates, and some categories will go the No Award, but most of the rockets will actually go to deserving work. If Chu wins, I think the vast majority of the fans in the auditorium will be more happy than not by night's end.

If No Award wins, however... if No Award takes the Campbell, it will represent a huge and ominous victory for the "nuclear option," for the faction of fandom that wants to destroy the village in order to save it. A victory by No Award in this category will signify that the voters decided to throw the baby out with the bathwater, and will likely betoken a long ugly night ahead, with category after category going to No Award. Myself, I think this unlikely. I think the hardcore "vote No Award on everything" voters are a small (if noisy) minority. But I could be wrong. It could happen.

And what if one of the four Puppy finalists takes the tiara?

That would represent a victory for the Puppies, certainly. But even there, certain distinctions should be made. Rolf Nelson was a candidate of the Rabids, but not the Sads. A victory by Nelson would be a singular triumph for Teddy Beale and the most extreme elements of Puppydom... and could suggest even worse results ahead, up to and including VD actually winning one or both of the Editing Hugos for which he is nominated.

Kary English, on the other hand, represents a much more moderate side of Puppydom. Though initially put forward by both the Sad and Rabid slates, VD later dropped her and removed her from his suggested ballot entirely when English put up a couple of blog posts that distanced herself from the Puppy party line. English is also a Hugo nominee this year, for her story "Totalled." She's the strongest writer of the four Puppy finalists, and in any normal year would be Wesley Chu's toughest competition. This year? She could well finish last, since some trufans will not forgive her for being part of the slates to begin with, and the Rabids will not forgive her for breaking ranks. Myself, I think English deserves better. While I don't think she is as good as Chu at present, she is plainly a talented new writer, and not unworthy of a Campbell nod. I would prefer a Chu victory in this category... but I'd rather see English take the tiara than No Award.

Oh, and while we are crunching candidates here, Eric S. Raymond warrants a few words. A candidate of both the Sad and Rabid slates, Raymond was nominated as one of the field's best new writers on the basis of a single published story, the thinnest resume in the entire history of the Campbell Award. Maybe if that story was the greatest short ever published in our genre, that would be warranted... but it's not. Even Raymond himself expressed incredulity at his nomination. Given how little SF he has produced compared to Chu and the other finalists, one might think that Raymond would be the longest of long shots. Ah, but there's another factor. However much a neophyte he may be as a writer of science fiction, Eric S. Raymond is a well-known figure is the gaming world. Should Raymond win the Campbell, despite his shaky credentials as a writer of fiction, it would suggest strongly that large numbers of gamers had purchased supporting membership to vote for him. (Whether those gamers were Gamergaters is another question entirely, and one that cannot be proved. So far as I know, Raymond has not been a part of the Gamergate controversy).

I have no idea who is going to win.

But once we know the winner, it will tell us a lot about how the rest of the night will go.