Book Signing and Interview with Melinda Snodgrass and Steven Gould

Ogre Jenni speaks to you! Hi.

Disclaimer aside, science fiction authors Melinda Snodgrass and Steven Gould will participate in a Q&A and book signing at the Cocteau on Thursday, September 17th at 7:00 p.m. Tickets are available here! Snodgrass will read from her newest novel, Edge of Dawn, and Gould will read from his latest book, Exo. 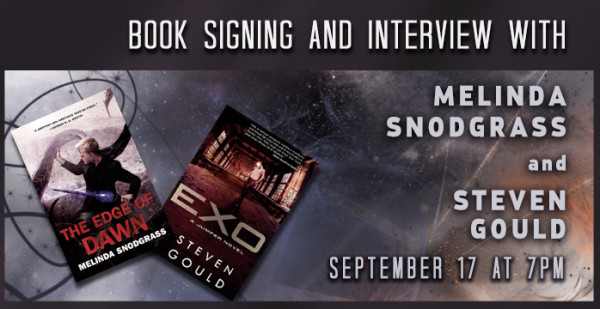 Melinda Snodgrass’ Edge series takes place in Albuquerque, New Mexico. The protagonists of Edge of Reason, Edge of Ruin, and the latest from the series, Edge of Dawn, are humanist individuals who stand for a rational and scientific approach to comprehending the universe. They are locked in a desperate conflict with the “Old Ones,” ancient—and Lovecraftian—beings who use religious extremists and their superstitious methods to carry out their designs. Apparently there are even worse monsters in Albuquerque than Walter White! Anyway, the Old Ones ultimately seek domination over humankind through the vehicles of magic and dogma. The series’ main protagonist, an APD cop named Richard Oort, fights to save humanity from these dark influences.

Steven Gould’s Jumper series is a great set of sci-fi novels about people who can teleport. The first Jumper novel follows a teen named Davy who learns he can teleport, or “jump,” when he is about to be brutally beaten by his father. Narrowly avoiding the belt, Davy suddenly appears at his public library. After a few more harrowing experiences, he learns to control his ability and use it at will. Exo, the latest novel in the Jumper series, features Davy’s daughter, Cent, as the protagonist. To avoid the malintent of certain government agencies, Cent explores the possibility of “jumping” into outer space.

Besides some incredibly mind-melting fun with quantum entanglement teleportation (have a fun time going down that rabbit hole—I’m stuck down here - SOMEONE HELP ME!!!), Gould knows that the teleportation of complex systems (like human bodies) isn’t really plausible. However, for the sake of awesome storylines and metaphorical possibilities, he develops an imaginative system for how teleportation could work in this world. This system is still based off of some very cool—and real—physics. If you’d like to hear a little bit more about how his jumpers jump, listen to this interview with Gould on Geek’s Guide to the Galaxy via Wired. Otherwise, visit us at the Cocteau on the 17th and get yourself a personalized book!