Ogre Jenni here—I am George's minion who helps out at his beautiful cinema and events venue in Santa Fe, the Jean Cocteau Cinema!

This Friday, March 11th, Jean Cocteau Cinema will screen Ran, Akira Kurosawa's epic story about an aging warlord, the man's scheming sons, and the fate of his divided fiefdom. If you happen to be in the area, specific showtimes can be found here!

Science fiction author John Jos. Miller is also a movie buff and film reviewer for the Cocteau! As we love both Akira Kurosawa and John Jos. Miller, we wanted to share Miller's thoughts about this incredible Kurosawa classic with you. 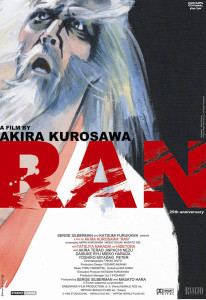 RAN (which means “chaos” or “revolt,” in Japan – among other things) is certainly one of director Akira Kurosawa’s top half dozen movies, so it’s safe to say that it’s one of the greatest films ever made. It was his fourth last, and at the time the most expensive Japanese movie ever, at a cost of $12 million dollars. Nowadays, of course, you can’t even get a lead actor for that much.

For twelve mil, Kurosawa delivered a brilliant historical epic about the Fate of the Ichimonji Clan after its warlord leader decides to call it a day and abdicate in favor of his oldest son. Not a good decision, as it turns out. The family is ripped apart by greed and pride, and the machinations of Lady Kaeda, the wife of the oldest brother, whom the warlord had named his successor. Kaeda is possibly the most cold-blooded, sinister female character in film history, and it is a somewhat queasy pleasure watching her exert her indomitable will over the two corrupt oldest brothers. 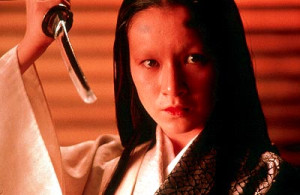 Kurosawa’s direction, his attention to detail in RAN, is nothing short of amazing. His use of color and sound are both particularly praiseworthy. Pay attention to the background sound. The imminent presence of Lady Kaeda, for example, is always announced by the sinister swishing noise (in effect kind of like nails on a chalkboard) made by her silken garments rubbing together. The battle for the Third Castle (the first big fight scene) plays out against a lush musical score with all ambient sound removed – until a critical moment in the proceedings – framing the horrific bloodshed with an almost balletic beauty and making it as darkly compelling as any Bosch-painted nightmare landscape. Simply brilliant. 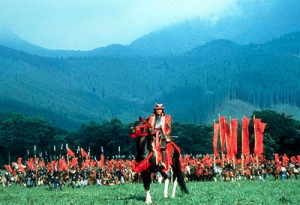 Much has been written about RAN being Kurosawa’s adaptation of Shakespear’s KING LEAR, but the screenplay was actually well into development before Kurosawa knew about the play. He did include elements from the Bard’s plot, but he put his own spin on the story. For example, Lear has little back story in the play. In RAN, his lifestory is filled out. He’s a cruel warlord whose own ambition and overweening pride leads not only to his own destruction, but that of his family and his empire.

I‘m normally not a fan of unrelenting despair – and RAN is one hundred and sixty two minutes of uninterrupted gloom that concludes with one of the bleakest scenes I’ve seen on film – but a masterpiece is a masterpiece. Kurosawa was nominated for Best Director for RAN, and lost to a jumped-up romance, OUT OF AFRICA. Which is a nice bit of nihilistic despair, right there.

–THIS POST IS BROUGHT TO YOU BY THE MINIONS OF FEVRE RIVER—
Tags: akira kurosawa, jean cocteau cinema, john j. miller, ran
Subscribe