Another post from Ogre Jenni—hope you kids don't mind. I work at George's cinema in Santa Fe—what a lucky ogre I am! 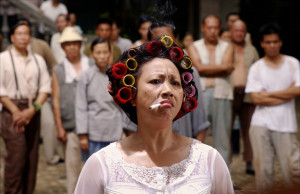 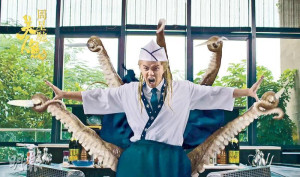 And who won't love the half-octopus mer-uncle sushi chef in The Mermaid?

David Ehrlich from Slate says of Chow's latest film, “...it's demented. Great. And a hit." He also adds that, "…Chow, without overlooking his hometown crowd, directs with a primal wit that appeals to all audiences with the immediacy of silent cinema.” Read his full review here!

MORE ABOUT THE FILM:

Xuan's estate project involving reclamation of the sea threatens the livelihood of the mermaids who rely on the sea to survive. A mermaid named Shan is dispatched to assassinate Xuan, but this inevitably leads to a complicated, interspecies, office romance. Out of his love for Shan, Xuan plans to stop the reclamation. Unfortunately, Shan and the other mermaids are hunted by a hidden organisatio, and Xuan has to save Shan before it's too late.