HIGH STAKES, the latest Wild Cards mosaic novels, was released in hardcover by Tor on August 30, and should now be available at your local bookstore or from your favorite online bookseller. 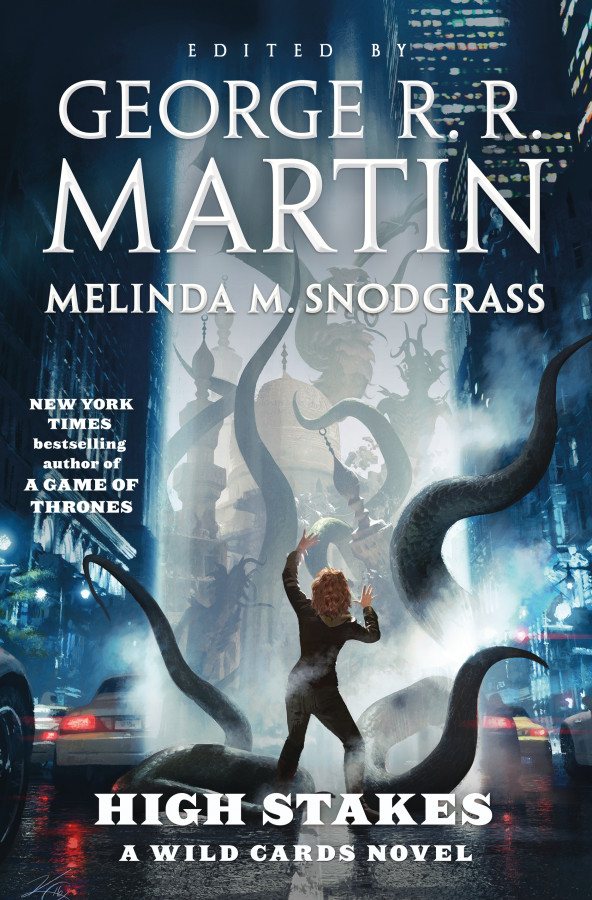 This is the third and concluding volume in the current Wild Cards triad, which began with FORT FREAK and continued in LOWBALL. It's a full mosaic, six storylines interwoven to make a single collaborative novel. This time around the featured characters (and their writers) are Infamous Black Tongue (David Anthony Durham), Detective Francis Xavier Black (Melinda M. Snodgrass), the Midnight Angel (John Jos. Miller), the Amazing Bubbles (Caroline Spector), Babel (Stephen Leigh), and Tesseract (Ian Tregillis)... but you'll be seeing plenty of Hoodoo Mama, Carnifex, Baba Yaga, Lohengrin, and many of your other favorite characters as well. Editing was by yours truly, assisted as ever by Melinda M. Snodgrass.

Although the official publication date was August 30, we launched HIGH STAKES two weeks early with a mass signing at worldcon in Kansas City, sponsored by Rainy Day Books. And I'm pleased to say the launch was a huge success, probably the largest Wild Cards signing in the entire thirty-year history of the series (yes, I've done ICE & FIRE signings that dwarfed it, but that's not just a different animal, it's a whole 'nother genus). Four of the six HIGH STAKES authors were on hand to assist me in defacing the hardcovers (David Anthony Durham and Ian Tregillis were not at the con, alas), along with another dozen odd Wild Carders, and the line went on and on forever. We must have signed four hundred copies of HIGH STAKES, easy, and probably an equal number of older WC titles. And then we signed lots and lots of additional stock as well. So if you couldn't make it to Kansas City, but would like to snag one of the "five signature" copies of HIGH STAKES, go to http://www.rainydaybooks.com/

Tor also had some video cameras on hand, to take advantage of having so many Wild Carders on hand in the same place at the same time, and interviewed just about everyone. The plan is to release a series of short promo trailers about the series. Here's the first of them, featuring Melinda Snodgrass, Michael Cassutt, and yours truly. Many more to follow.