Got some cool stuff coming down the pike for Wild Cards fans... especially those of you who came in with INSIDE STRAIGHT or FORT FREAK or one of our other recent Tor originals, and have been seeking high and low for the older books ever since.

Many of those older books are, alas, still out of print. But Tor has reissued the first five volumes in trade paperback, and now we're bring back volumes six and seven as well.

ACE IN THE HOLE is our sixth volume. Set during the dramatic (and bloody) Democratic National Convention of 1988, this one is a full mosaic, weaving together stories from Melinda M. Snodgrass (Dr. Tachyon), Walton Simons (Demise), Stephen Leigh (Puppetman), Walter Jon Williams (Golden Boy), and Victor Milan (Mackie Messer). Look for the new trade paperback on FEBRUARY 28. 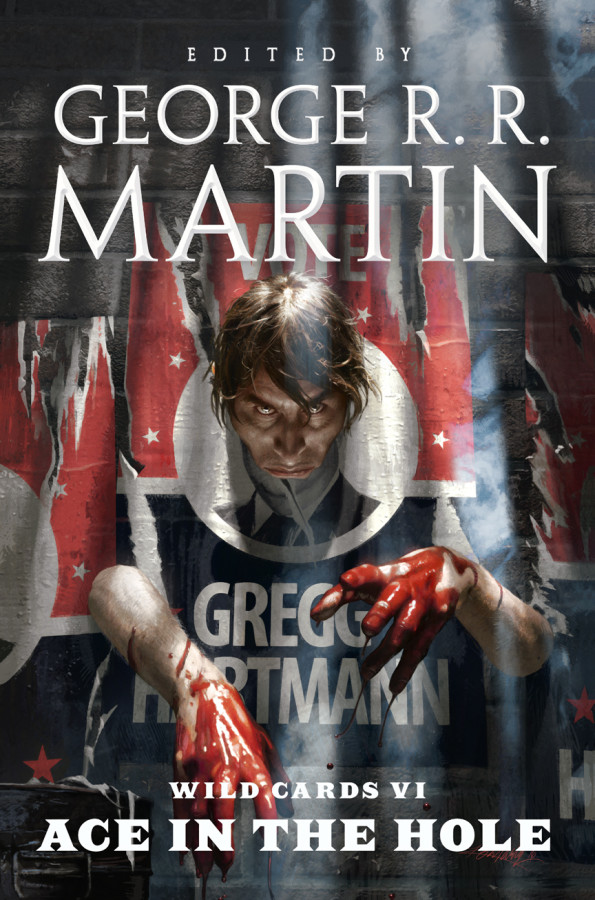 DEAD MAN'S HAND, volume seven, is a companion piece to ACE IN THE HOLE. In fact, the two were actually one book, until it got too big and our publisher asked for a split. DMH takes place during the same week as AITH, the former mostly in New York City, the latter mostly in Atlanta. This one is a mosaic too, but with only two writers: John Jos. Miller writing Yeoman, and yours truly with Jay Ackroyd, aka Popinjay. Which makes it more of a collaborative novel, really. This is our noir novel, a classic mean streets murder mystery with superpowers. It will be great to have it back in print after so long. Look for it on JUNE 13. ((Both of those covers are by the amazing Michael Komarck. Do remember that name when you're making your Hugo nominations for Best Professional Artist, Komarck is way overdue)).

OH, and hey... on other Wild Card fronts, there's a cool new post up on the WC website, wherein David Anthony Durham confesses how he stole his IBT character from his son. ;) You can check it out here:
http://www.wildcardsworld.com/