The Swords Are Drawn

For all you fans of sword 'n sorcery, and/ or my own 'fake histories,' the new anthology from Gardner Dozois, THE BOOK OF SWORDS, has been scheduled for release on October 10, and is now available for pre-order from Amazon https://www.amazon.com/Book-Swords-Gardner-Dozois/dp/0399593764 and many other online booksellers. I imagine your favorite local bookseller is taking orders too. 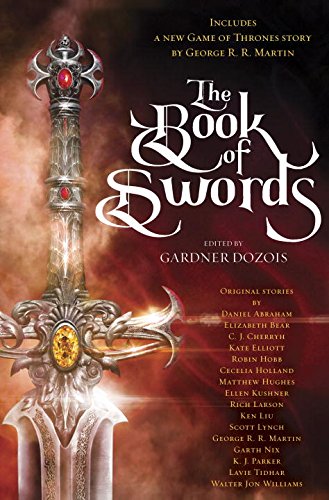 This is NOT one I co-edited with Gargy (people keep getting that wrong), so I haven't read any of the other stories yet, but it looks to have a helluva lineup, with originals by Lavie Tidhar, Daniel Abraham, Scott Lynch, C.J. Cherryh, Robin Hobb, Ken Liu, Cecelia Holland, Walter Jon Williams, and many more. And of course it also includes "Sons of the Dragon," a chronicle of the reigns of Aegon the Conquerer's two sons, Aenys I Targaryen and Maegor the Cruel, for those who cannot get enough of my entirely fake histories of Westeros. That one has never been published before in any form, though I did read it at a couple of cons.

Speaking of fake history... regulars here may recall our plan to assemble an entire book of my fake histories of the Targaryen kings, a volume we called (in jest) the GRRMarillion or (more seriously) FIRE AND BLOOD. We have so much material that it's been decided to publish the book in two volumes. The first of those will cover the history of Westeros from Aegon's Conquest up to and through the regency of the boy king Aegon III (the Dragonbane). That one is largely written, and will include (for the first time) a complete detailed history of the Targaryen civil war, the Dance of the Dragons. My stories in DANGEROUS WOMEN ("The Princess and the Queen") and ROGUES ("The Rogue Prince") were abridged versions of the same histories.

No publication date has been set yet, but it's likely that we will get the first volume of FIRE AND BLOOD out in late 2018 or early 2019. The second volume, which will carry the history from Aegon III up to Robert's Rebellion, is largely unwritten, so that one will be a few more years in coming.

And, yes, I know you all want to know about THE WINDS OF WINTER too. I've seen some truly weird reports about WOW on the internet of late, by 'journalists' who make their stories up out of whole cloth. I don't know which story is more absurd, the one that says the book is finished and I've been sitting on it for some nefarious reason, or the one that says I have no pages. Both 'reports' are equally false and equally moronic. I am still working on it, I am still months away (how many? good question), I still have good days and bad days, and that's all I care to say. Whether WINDS or the first volume of FIRE AND BLOOD will be the first to hit the bookstores is hard to say at this juncture, but I do think you will have a Westeros book from me in 2018... and who knows, maybe two. A boy can dream...

Comments for this post were disabled by the author