I spent some time in LA the week before Thanksgiving, as mentioned below in my "City of Angels" post. Meetings, meetings, and more meetings... along with some get-togethers with old friends.

There's a lot of cool things in the works, most of which I can't tell you about. (Yet).

I can say a few words about one of the highlights of the trip, however. I finally had the chance to sit down and break bread with the guys who are bringing NIGHTFLYERS to television for the SyFy channel: writer/ creator Jeff Buhler, who scripted the pilot (below, left), and showrunner Daniel Cerone, who will helm the series (below, right). 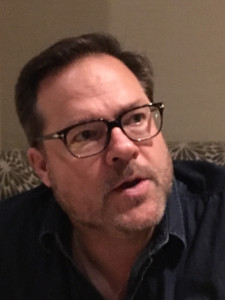 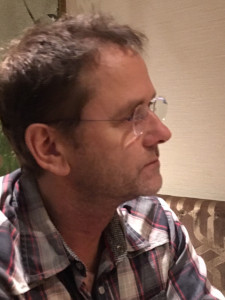 This was the first time I'd met (or spoken with) either Jeff or Daniel, but we had a great meeting, and I was impressed by their enthusiasm and their plans for the series. Cerone's extensive list of previous credits includes THE BLACKLIST, THE MENTALIST, and DEXTER. Buhler's previous writing credits include ELOISE, PET SEMATARY, and THE MIDNIGHT MEAT TRAIN. He's also been an actor and director. I read a draft of his pilot back in May, when I first heard of the NIGHTFLYERS television project. While it departs considerably from my novella in certain details, the essence of the story remains the same -- and I thought the teleplay was quite strong on its own terms, and a good launching point for a series.

The original version of "Nightflyers" was published in 1980 (when I looked more like the guy in the picture above), as a 23,000 word novella in ANALOG. Set in my 'Thousand Worlds' (aka 'manrealm') universe, it was one of the SF/ horror hybrids that I was writing in the late 70s and early 80s, the best known of which was my novelette "Sandkings" from the year before. "Sandkings" had won both the Hugo and Nebula awards, and "Nightflyers" was also well received, winning the LOCUS Award as best novella and a place on the Hugo ballot (losing the rocket to a Dorsai novella by Gordy Dickson). The novella also won the Seiun Award in Japan. (FWIW, the inspiration for both of those stories was a statement I read somewhere by a critic, to the effect that SF and horror was opposites, and fundamentally incompatible. As a lifelong fan of both, that assertion struck me as nonsense, so I set out to prove it wrong by blending the two genres together. Worked out pretty well for me).

A few years later, I expanded "Nightflyers" to 30,000 words for inclusion in a volume of Dell's BINARY STAR series, where it was paired with Vernon Vinge's "True Names." The longer version has been my preferred text ever since, and it was that version that was included in the Bluejay collection NIGHTFLYERS AND OTHER STORIES, and later in my RRetrospective DREAMSONGS. In 1984, screen and television rights to "Nightflyers" were purchased by Vista, and a low budget feature film was released in 1987, scripted by Robert Jaffe and starring Michael Praed and Catherine Mary Stewart.

Sometime in the last year or so, SyFy acquired the television rights via that old movie deal, unbeknownest to me; the first I'd heard of their development was last spring. Honestly, at first I was baffled as to how they hoped to get a series out of my story, since at the end of the novella (and the film) pretty much everyone is dead (it was a horror story, after all). But in May, UCP got me a copy of Jeff Buhler's script, and I saw how he'd dealt with that. It was a good read, and yes, I came away with a better idea of where they'd find a few seasons.

I was delighted to have the chance to sit down and talk with Jeff and Daniel, and learn more of their plans. NIGHTFLYERS was only a pilot script in May, but subsequently it has been picked up for a full ten-episode season order, with a substantial budget, one that should allow them to create a show that looks as good as modern audiences expect. They showed me drawings of some of the set designs, some very cool sets. They even showed me the NIGHTFLYER herself:

NIGHTFLYERS will be shot in the Republic of Ireland, I'm told, on sound stages in Limerick... which will give them access to the same great pool of Irish and British actors that GAME OF THRONES has tapped in Belfast (and considering how many characters we've killed, a lot of them should be available). ((If by some miracles I actually complete enough of my other projects to create some free time, I've love to go over there and kill two birds with one flight by visiting both the GOT and NIGHTFLYERS sets... but that remains a long shot, given my current word load)). If all goes according to schedule, the series should debut this summer, in late July. It will be broadcast on SyFy in the USA, and on Netflix around the world.

Presently Cerone and Buhler and their team are deep in the throes of pre-production and casting... and I have some news on the casting front as well, a casting that has pleased me more than I can possibly say, which I will save for another post.

((Comments allowed, but only on NIGHTFLYERS. Stay on topic)).
Tags: nightflyers, television
Subscribe